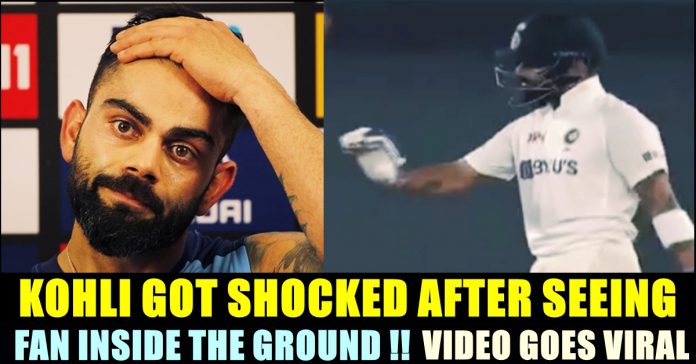 A fan breached the security and tried to meet Virat Kohli in the third test between India and England at the Motera while he was batting. The Day 1 of Pink ball test match saw many interesting moments including team India picking up all the 10 wickets of team England who won the toss. The match is being played with the presence of 55,000 fans which is the 50% of the world’s largest cricket stadium. During India’s batting, a fan breached the security to meet Kohli and the video of the cricketer’s reaction is going viral in social media platforms.

In historic day night pink ball test match which also marked the 100th test match of Indian pacer Ishant Sharma, a fan of Virat Kohli grabbed the attention of the crowd. He breached security at Motera and entered the field-of-play to get a close glimpse of Kohli and to wish him. That did not happen as he was escorted out of the field by the securities after he made the game come to a halt for a minute.

Video of the cricketer’s reaction after seeing the fan inside the ground is doing rounds in social media platforms. The cricketer who gets shocked, steps back in a hurry and suggests the fan to stay away before laughing while looking at the big screen.

Fan breaches security to run onto the ground. Virat Kohli instantly moves away from him. Looking at it, the fan ran back. Crowd roars.#INDvENG pic.twitter.com/RUzlZJ9E8e

Day one ended with India scoring 99 runs with the loss of three wickets. Minutes before the stumps, Kohli got out off Leach after looking to cut the ball which pitched near to the stumps. The skipper scored 27 runs and Rohit Sharma scored an half century. He is looking solid and is expected to continue the form he displayed in the second test.

“No Recognition For Us” Man Who Worked In Many Top Films Slammed Award Functions !!