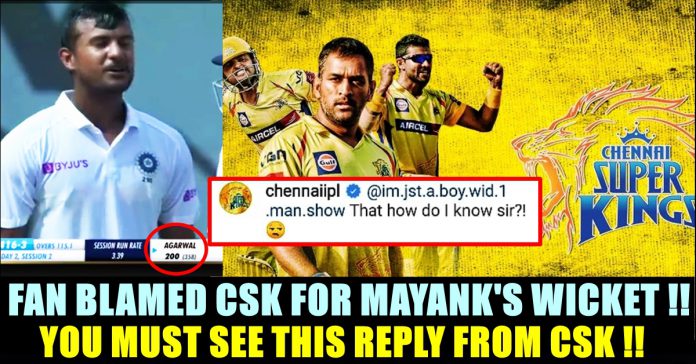 Mayank Agarwal hit his maiden double hundred in Test cricket as India continued to dominate South Africa in the first Test of the 3-match series in Vizag on Thursday. Agarwal made his debut in Australia last year and made an immediate impact Down Under.

After a solitary half-century on the tour of West Indies, Mayank Agarwal walked in to open with Rohit Sharma and the pair became only the third in Indian cricket history to add 300 for the opening wicket of a Test innings.

After Rohit Sharma fell for 176, Mayank Agarwal stayed strong and became the 23rd Indian to score a double century in Test cricket. This innings from the youngster impressed many fans and former cricketers across the country who are lauding it in Internet.

The official instagram account of Chennai Super Kings also uploaded a post praising the cricketer for his terrific performance. CSK social media account which is known for its unique way of choosing words in their posts, wrote “Trusting yourself and doing the daily drill with no expectations results in magic. That’s a Mayank-jaalam double-ton for you!” in their post.

Trusting yourself and doing the daily drill with no expectations results in magic. That's a Mayank-jaalam double-ton for you! #WhistlePodu #INDvSA PC: @indiancricketteam 🦁💛

At the time CSK uploaded this post, unfortunately Mayank Agarwal got out in Dean Elgar’s delivery. He scored 215 valuable runs for the team in his innings. One of a follower, who witnessed this post of Chennai Super Kings, in a humorous way, blamed the franchise for Mayank’s wicket.

“Ne post pota ..anga avan out agitan 😂😂😂 Nala panringa ma 🔥🔥” the Instagram user wrote in his comment. As the social media account of Chennai Super Kings is very famous for their witty replies to the opponent teams and its fans, their reply to this follower is just hilarious.

They chose to reply with a famous dialogue of Crazy Mohan from the film “Vasool Raja MBBS”, in which he always replies to the antagonist’s questions by uttering “How Do I Know Sir”. “That how do I know sir?! 😒” said the reply of CSK which made many of its followers to laugh.

Indian team is currently going strong against the Proteas as they registered 453 runs with 5 wickets in hand, during the tea break of day 2. What do you think on this conversation between CSK and the follower?? Comment your views below !!

Previous articleActress Slammed Family For Their Dangerous Ride !! Check How This Follower Criticized Her !!
Next articleSandy’s Wife Lost Her Cool On Seeing This Comment Of Mugen’s Supporter !! CHECK OUT !!

Sakshi Brutally Trolled Kavin For Literally Flirting With Sherin !! CHECK WHAT SHE HAS TO SAY !!

Sakshi still couldn't come out of the trauma that Bigg Boss show made on her. She has been watching the show since her eviction...

Madipakkam, Puzhuthivakkam, Pulianthope and KK Nagar are some of the areas that got severely affected due to the water logging that caused by the...