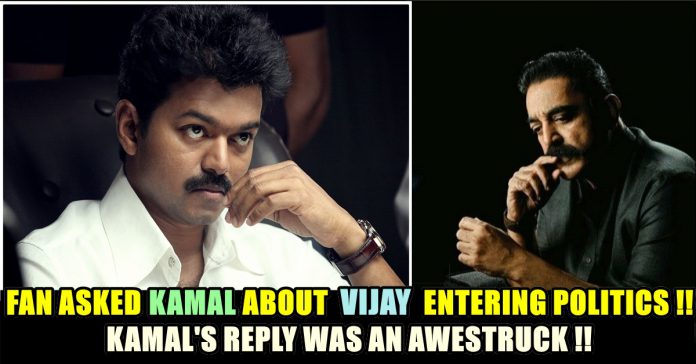 Film star Kamal Haasan said there will be no more films for him as his plunge into politics for the people of Tamil Nadu is final and irreversible.

“Except for the two films which are coming out, there will be no more films for me,” declared Haasan in an interview to Rahul Kanwal, Managing Editor of India Today at Harvard University in Boston. “I think that part is done, I don’t think I will. No more signing films,” he siad. When asked whether he would come back to movies if he loses elections, Kamal said he doesn’t think he will lose and such a possibility could be thought about later.

On being asked whether he would stick to politics even if he loses the election, he said, “I will have to do something for an honest living. But I don’t think I am going to lose.”

“I may not have been a political entity but we have been in social service for 37 years. In these 37 years, we have collected about 10 lakh loyal workers. “They are with me for the past 37 years. At my instruction, they have engaged more and more younger people in our welfare movement over the years including about 250 lawyers. All would become volunteers.”

Now the actor hosting the sensational show called BIGG BOSS. Managing politics, films and the show, the actor/politician plays the perfect host, entertaining and flaying the contestants all at once. With statements like “Corruption in governance begins when people act like they have sacrificed when they have just done their duty”, the Makkal Needhi Maiam chief also gets his political punches. He also berated the housemates for letting things get out of hand with the carrot-onion controversy.

Now today he is seen answering a series of questions asked by his followers in his twitter account. He answered straight and honest without being diplomatic. One of his follower asked how he will react actor Vijay enter politics. He answered very sweetly and it left us in awestruck. Check out the conversation :

This was the question asked by the user. And the answer of Kamal Haasan follows :

He said ” I welcome all my young brothers to the politics , Vijay is my favourite brother. not only for me , he is loved by each and everyone , I welcome him whole heartedly” he replied that ardent fan of Vijay who kept “Sarkar” first look as his display picture.

What do you think on this statement of Kamal Haasan?

After participating in the 100 days reality game show named "Bigg Boss", a number of participants took part in the new dance show "BIGG...