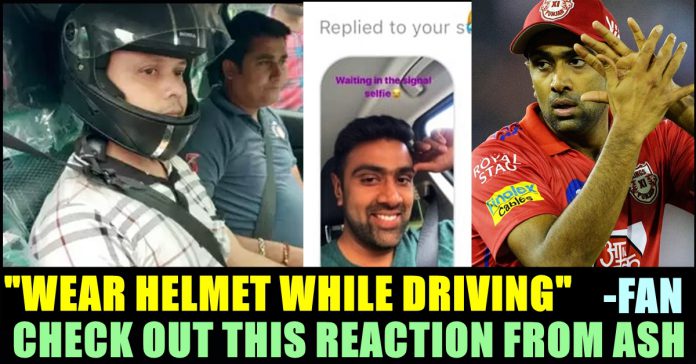 Currently Ashwin continuing his fine form with the ball, claiming a match haul of nine wickets for Nottinghamshire in an ongoing County Championship match against Kent.

Ashwin grabbed a five-for in the second innings to go with his four scalps in the first essay. Ashwin, who has only featured in four county games this season, has already bagged 32 wickets. This was his fourth five-wicket haul in seven innings for the Trentbridge side — figures further embossed by one 10-wicket match haul against Surrey. Ashwin even scored a 50 from 77 balls but couldn’t prevent Notts from slumping to defeat.

He also found time to share his routine in his official Instagram account. The cricketer recently posted a picture which had him waiting in a traffic in his car. To that picture one of his follower replied by saying that Ashwin is not following the traffic rules sincerely as he follows the rules of cricket game.

The Instagram user also asked the cricketer to wear helmet while driving car which is leaving us in splits. Ashwin posted the screenshot of it and wrote “Very Good 100 marks” with laughing emojis.

Check out the screenshot of Ashwin’s Instagram story here :

This is mere a mock from Its John Cena here (Insta urer) on the new motor vehicle rules which slams heavy penalty amount on citizens. Traffic police from across the country are coming down hard on those who are violating the new rules as per the amended Motor Vehicles Act. There have been penalty cases as high as Rs 80,000, in accordance with the new regulations. In a bizarre incident has sprung from Aligarh in Uttar Pradesh.