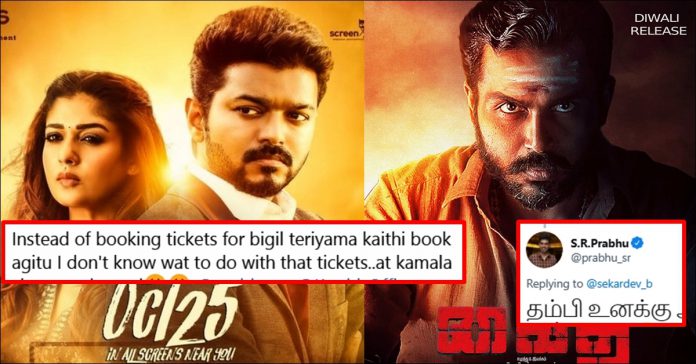 Bookings of Diwali releases “Kaithi” and “Bigil” are in full swing across the theatres in Tamilnadu. Kaithi having Karthi in the lead and was directed by “Maanagaram” fame Lokesh Kanagaraj who is going to direct “Bigil” Vijay’s next film. Both the movie’s respective production houses announced the release date on the same day and announced it as same date date as well.

Twitter war arouse between fans as both the movies are fighting to get more number of screens across Tamilnadu. Promotional activities from both the movies were also started and it is also in full swing. Meanwhile, a promotional post of Kaithi’s producer S.R Prabhu offended the fans of actor Vijay.

Now the producer is keen in promoting his film through his witty replies to the fans of actor Vijay. Yesterday, one of a fan posted a tweet in his twitter account saying that he booked tickets for “Kaithi” instead of “Bigil”. He also worried by saying that he doesn’t know what to do with the tickets which he bought in “Kamala Cinemas”

“Instead of booking tickets for bigil teriyama kaithi book agitu I don’t know wat to do with that tickets..at kamala cinemas chennai😭😭
@prabhu_sr @Karthi_Offl @Suriya_offl“

Instead of booking tickets for bigil teriyama kaithi book agitu I don't know wat to do with that tickets..at kamala cinemas chennai😭😭 @prabhu_sr @Karthi_Offl @Suriya_offl

Check out his reply :

One more user slammed S.R Prabhu by saying that he haven’t seen a producer who talked in a cheap way like Prabhu did. As the user who commented, deleted his tweet, check out the screenshot below :

To another user who criticized S.R Prabhu by saying that he is a snake, Prabhu wrote “Yes…I am a nalla paambu…nalla padam eduppen 🐍 😂✌🏼” which reached as many as 3k likes from the twitter users.

“Kaithi” which looks like a crime drama has Karthi as a prisoner. On the other hand, “Bigil” has actor Vijay in three different getups. S.R Prabhu who is known for producing films like “Aruvi”, “NGK”,”Joker”, is a relative of the veteran actor Sivakumar which naturally makes him as a cousin of actors Suriya and Karthi.

What do you think on these replies of S.R Prabhu ?? Comment your views !!

A 2019 video of Bollywood actress Divyanka Tripathi dancing in front of Academy award winning musician A.R Rahman got resurfaced in Internet with online...

Actress Samantha has been going through a lot of negativity in her life ever since making a decision about her marriage life with Telugu...