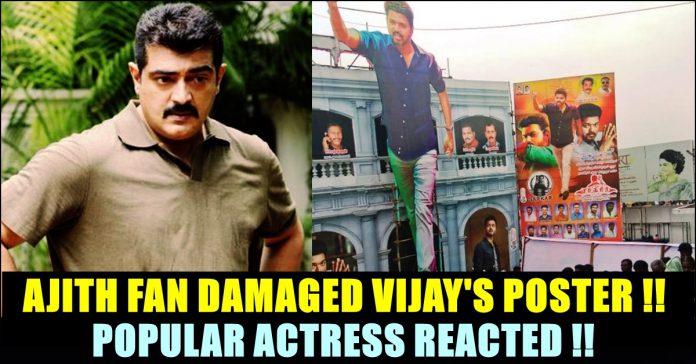 “Thalapathy” Vijay and “Thala” Ajith are two of the most talented actors in the cinema industry of Tamilnadu. The rivalry between both the actors is less as far as the rivalry between their fans is considered. Its been a long time since actor Ajithkumar and Vijay declared as official rivals. In few occasions, dialogues in the movies of the actors evidently proved their rivalry. For example Vijay, in his film Thirumala would say that Life is a circle and it would turn the other way around at anytime. Thirumala was released in 2003.

In a way of answering to this dialogue, Ajith in his 2004 film “Jana” in a scene would say that his life is not a circle or square but a straight line. Then the fight between the actors took place in movie theatres but now as social media has been an easy accessible one to every smartphone users, it is really disgusting to see the comments made by the fans.

Now a fan of actor Ajith has allegedly shared a picture of Vijay’s poster which was damaged with cow dung in Twitter. On seeing this picture comedy actress Harathi who represents herself as an ardent “Thala fan” has advised the fan not to involve in such things.

After her advice, the fan deleted his post and the tweet of Harathi said “இது தப்பு seenu dont share negativity..he is definitely good human and maasss actor who ever does this is going to get in his real face in this real world..lets spread only love plsss🙏😊”

இது தப்பு seenu dont share negativity..he is definitely good human and maasss actor who ever does this is going to get in his real face in this real world..lets spread only love plsss🙏😊 https://t.co/yAqP2oFNBq

To her tweet one of an Ajith fan asked her not to advice to which Harathi replied by asking him not to let people advice them.

Being so interactive with her followers in Twitter, Harathi never shied away to reply for trolls and abuses. Comedy actress Aarthi aka Harathi rose to fame among Tamil audience through films such as “Padikathavan”, “Kutti” etc. She is one of the prominent contestant of Bigg Boss season 1 hosted by Ulaganayagan Kamal Haasan.

Check out some of the reactions Harathi received for her tweet :

This one pic is enough, for those guys pic.twitter.com/vnhixxV4nX

Bigil released on the Diwali day of the year 2019 and became a blockbuster with 300 crores of box office collection, according to actor...

How Much “Valimai” Collected So Far?? Official Word From The Producer

During his announcement on the OTT release of Ajith's recently released "Valimai" film, producer Boney Kapoor opened on how much the film collected in...