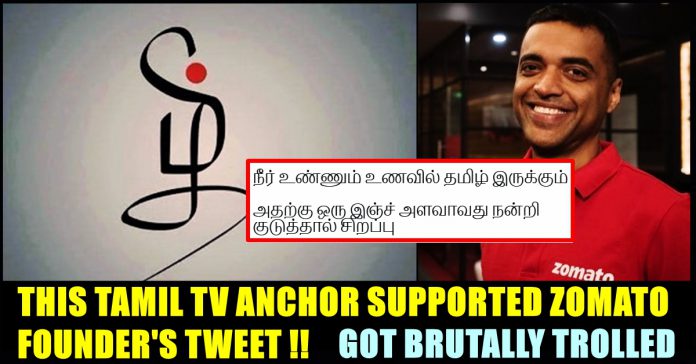 Popular Television anchor Sumanth Raman who is known for presenting sports shows, welcomed the tweet uploaded by Deepinder Goyal, founder of Zomato and got trolled by Mannargudi MLA Dr. T.R.B Raaja, actress kasthuri Shankar and many other users of Twitter. He encouraged the decision of Deepinder reinstating the call centre agent who made her personal opinion to a customer and also agreed to the statement of the Zomato founder who believed that the people of our country should increase their tolerance level.

“Having said that, we should all tolerate each other’s imperfections. And appreciate each other’s language and regional sentiments. Tamil Nadu – we love you. Just as much as we love the rest of the country. Not more, not less. We are all the same, as much as we are different.” he added in his tweet which is going viral.

And remember, our call centre agents are young people, who are at the start of their learning curves and careers. They are not experts on languages and regional sentiments. Nor am I, btw.

This tweet from Deepinder created huge outrage among the Tamil nadu based twitter users who started confronting the Zomato founder. “It is not about regional sentiments. It’s about not imposing the language and not judging or lecturing people. Btw don’t give lecture on tolerance to us.” a twitter user replied with many others reacting in a similar way. Thiruvaiyaru MLA Durari Chandrasekhar reacted to Deepinder by questioning him on how difficult it is for him to take responsibility on what happened.

Among the many who confronted Deepinder for his tweet, Sumanth Raman uploaded a tweet welcoming him. “Well said and well done by reinstating the employee” his tweet read.

Well said and well done by reinstating the employee. https://t.co/A6CIC9W2hA

MLA TRB Raaja, Actress Kasthuri and many others condemned Sumanth for his tweet supporting Deepender. Check out some of their tweets below :

Sir you must boycott @zomato and also all the restaurants serviced by Zomato. They are also abetting Zomato right because without them Zomato would not exist. OK? 😃

What nonsense. A customer friendly business anywhere else on earth wud have fired the insensitive employee , issued a public apology, given the aggrieved party a bunch of freebies and initiated a diversity drive.

Now the employer himself reinstates the fired employee and doing his part of schooling to the customer on how they should be tolerant….Interesting…looks like if given the chance even the founder would treat the customer in similar way ….(2/2)

Dr. Sumanth Raman was, is and will always be on the wrong side when it comes to sentiments of Tamils!

It is not well said. Please read with common sense. He is teasing us.

Sexual Harassment is one of the major issues prevalent all over the world. News about physical abuse appears every day on our screens. In...

Movies create a great impact on people in different ways. People swayed by the movies also handle situations in the real-life inspired by those...

A staff named Kuppusamy who works in the Tamil Nadu Generation and Distribution Corporation Limited department, caught on camera while hurling an electricity meter...

A reply made by France based model Fiona Allison to an Indian online user Rinku Pandey about the tradition of country India based on...