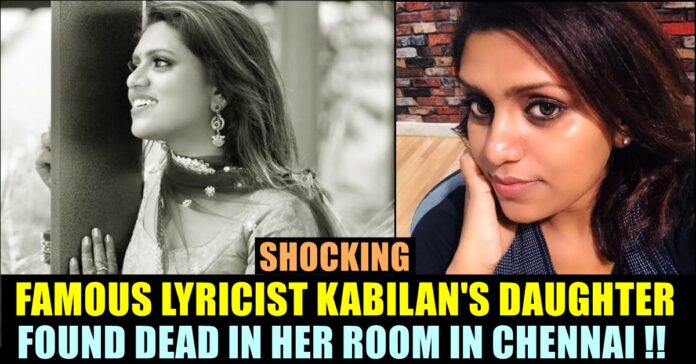 Famous Tamil lyric writer Kabilan’s daughter found dead at her house in Arumbakkam. Named as Thoorigai, the youngster who is a costume designer by profession hanged herself, says reports. The reason for the decision made by Thoorigai is unknown and the police officials are currently investigating the case.

Renowned lyricist Kabilan predominantly works in Tamil film industry. He has written lyrics for films such a “Ponniyin Selvan”, “Pisasu 2” which are going to hit the screens soon. “Sarpatta Parambarai”, “Psycho” are some of the recent works of the lyricist. He has written more than 500 songs in his career. Now, the news about his daughter Thoorigai hanging herself in their house which is located in MMDA, Chennai has caused a huge shock among the industry people.

Thoorigai has been working as an Institutional Editor for a magazine named “Being Woman” which is specially being published for women. First edition of the magazine was released by directors Pa. Ranjith, Cheran, actress Vimala raman in the year 2020. Apart from being a writer, Thoorigai was also working as a stylist and costume designer.

Now, it has been reported that the youth found hanging in the ceiling fan of her room in her house. Body of Thoorigai Kabilan is currently placed in a private hospital located in Saligramam, Chennai. According to News 18, Thoorigai was staying in her house for past few days and was seen depressed. Police have confiscated the cell phone of Thoorigai and are involved in investigating about the case.

Many fans and celebrities are expressing their condolence over the demise of the young talent. Here’s how internet reacted to the demise of Thoorigai :

Gone too soon #Thoorigai! We are supposed to collab.. shattered to hear this. You could’ve reached out to ur loved ones and poured ur heart out. This is not a solution!

Pappa is dis d way to go..2days kuda illa video call panni..is dis d punishment u have given has..@thoorigaikabilan miss u pappa.. y u made has cry?? Can’t u call up! pic.twitter.com/INJA1AfYpS

Hearty condolences to their family and friends. https://t.co/v165pRt9Cs

This is very sad! Now a days we are hearing many kids in their teens or twenties not able to convince themselves to live but to take their lives. Hope parents shower their love and affection at all times so that kids communicate with their parents openly whatever it may be.