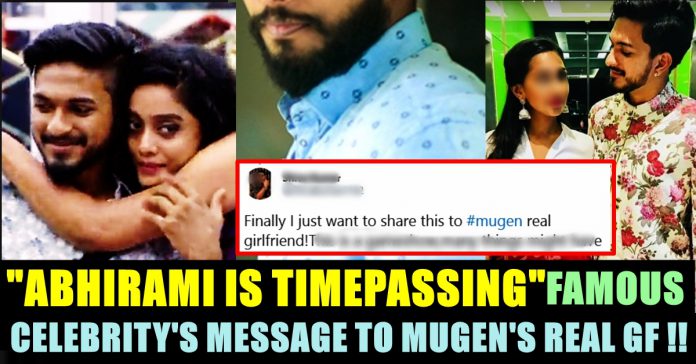 Abhirami Venkatachalam, one of the Bigg Boss contestant who has acted with actor Ajith Kumar in the movie Nerkonda Parvai. The movie is awaiting for its release in few days. As soon as entering the house, Abhirami on the very first day told her housemates that she is in love with Kavin, Sarvanan Meenatchi star.

When she proposed him, Kavin rejected it in a polite way by asking her to wait for 50 or more days to know about him completely. After few days, she started having a healthy friendship with Mugen. She played a “baby game” with him which caused controversy as Madhumitha opposed it by saying that it is against Tamil culture. 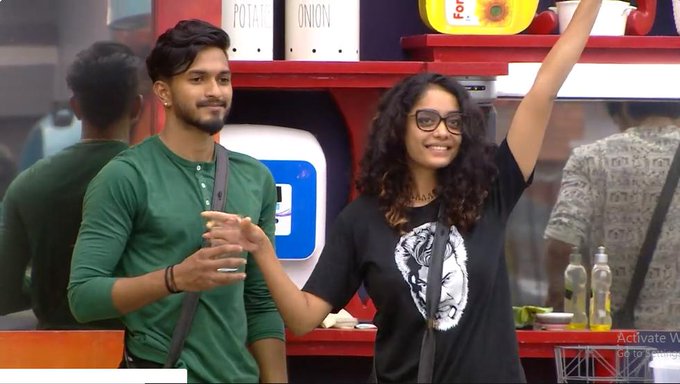 Abhirami, out of frustration, made a confession to the housemates, saying that her relationship with Mugen is merely a friendship. Now both of them are evidently maintaining a relationship beyond friendship. In Sunday’s episode of Kamal Haasan, when Tharshan played the character of Mugen, he revealed that Mugen has a girlfriend outside Bigg Boss house in Malaysia. He even revealed her name as “Sparkle”.

“As I have a girl named “Sparkle” waiting outside Bigg Boss house, I won’t let my relationship with Abhirami to go beyond limit” said Tharshan while playing the role of Mugen. Mugen and Abhirami were seen laughing when Tharshan said this. 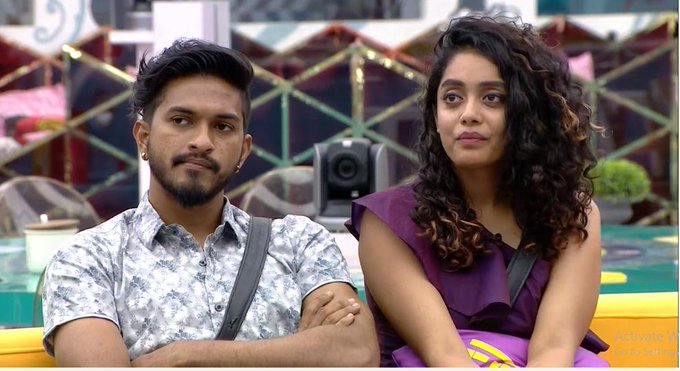 On seeing this episode, actor Shiva kumar aka Shivaji Dev who has acted in films like Singakutty and Idhuvum Kadanthu Pogum has posted a message for Mugen’s girlfriend  in his official twitter account. In his tweet Shivaji wrote “Finally I just want to share this to #mugen real girlfriend!This is a gameshow,many things might have hurt u,I understand.He has experienced so much in life & u know who he is!He is very matured.Abirami has only this timepass fling!Please wait &be strong!Respect! #BiggBossTamil3”

Finally I just want to share this to #mugen real girlfriend!This is a gameshow,many things might have hurt u,I understand.He has experienced so much in life & u know who he is!He is very matured.Abirami has only this timepass fling!Please wait &be strong!Respect! #BiggBossTamil3 It is notable that Shivakumar is one of a son of Ramkumar Ganesan which makes him a grandson of Legendary actor Shivaji Ganesan. He got recently married to former Bigg Boss contestant Suja Varunee who participated in the first season of Tamil Bigg Boss. He seems to be following the show very keenly which is evident through his twitter timeline. Check out some of the other tweets he posted regarding Bigg Boss : Indeed very touching episode today! Reshma is actually very strong, Mostly lot of people are neutral sometimes inside the house! I like mugen,today my respect towards him grew more higher!His feelings are true for reshma!I saw his genuinity in his tears &regrets! #BiggBossTamil3

What do you think on these views of Shiva Kumar ?? Comment your views below !!

Previous articleAshwin Got Brutally Trolled By Murali Vijay For His Bowling Actions ?? Watch This Video !!
Next article“Comali ” Producer & Director Accepted To Remove The Scene !! Check Why Fans Are Not Happy Still !!

Amitabh Bachchan Got Extremely Angry On seeing This Report About Him !!

Amitabh Bachchan who is currently getting treatment for the COVID 19 virus, got upset on seeing a report about him in the micro blogging...