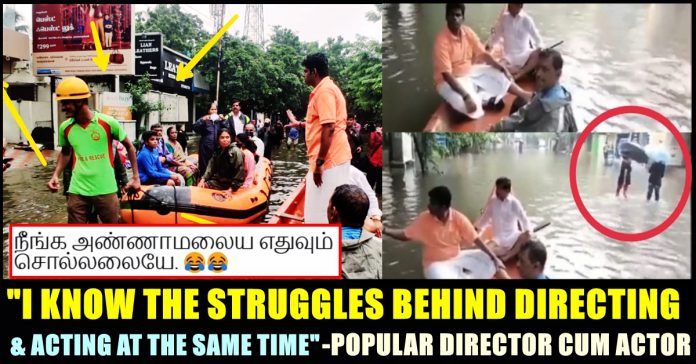 Video of Tamil nadu BJP leader Annamalai posing for pictures while visiting the houses in Chennai to know about their problems in order to solve them, became a subject to severe online troll as it shows the politician conducting a photo shoot while sitting in a boat surrounded by water. Politicians meeting people to gain publicity amidst this situation is common but the making video of the BJP leader’s photo shoot got leaked only to get trolled by the netizens.

Since Saturday, heavy rainfall overwhelmed Chennai and neighbouring areas, leading to waterlogging in several places. Chennai city received around 20 cm of rain on Sunday. India Meteorological Department has predicted more rains for Chennai, other regions of Tamil Nadu and surrounding states such as Andhra Pradesh in the next 48 hours.

The reason behind the continuous rain is another low-key pressure system that has formed over the Bay of Bengal that is set to reach Tamil Nadu by November 11. The civic authorities are clearing waterlogged areas on the war-footing levels. Red alert has been provided to Chennai city on 10th of November and 11 of the same month and holidays were announced to schools and colleges.

Tamil Chief minister MK Stalin, Leader of opposition Edappadi K Pazhaniswamy and many other political leaders are visiting places across the city and meeting people to know about their hardships in order to resolve the issues. Meanwhile, a video of Tamil nadu BJP leader K Annamalai visiting an area with the help of a boat which has knee deep water and participating in a photo shoot went viral across the social media platforms.

In a video that got surfaced, Annamalai caught pretending to be inquiring a lady who is a resident in the area about the situation. Throughout the video, a voice could be heard instructing the people around to move and pose appropriately to click pictures. Two men could be seen effortlessly walking in the water near the boat of Annamalai which caused severe troll in online platforms. Annamalai could be seen clearing people who were standing near him to pose for pictures.

Hashtags such as “Goat on the Boat” trended in Twitter to make fun of the politician’s stunt. Meanwhile, filmmaker Naveen came up with a sarcastic tweet to troll the BJP leader. “People like me who directed, acted, positioned camera angles, cleared crowds, instructed junior artists simultaneously know the struggles about how hard it is to do” Naveen said by adding a making picture from his film set.

He needs You for his next stunt 🙂😀 pic.twitter.com/nwcEwybBwk

"Paravai Muniyamma" is known among Tamil cinema audience for her unique way of singing and for her onscreen appearances in films like "Dhool" ,...

Complaint Registered Against Those Who Made Derogatory Comments On Vijay’s Family !!

Vijay Sethupathi became a subject to online harassment after one of his older video went viral in social media. A particular set of people...