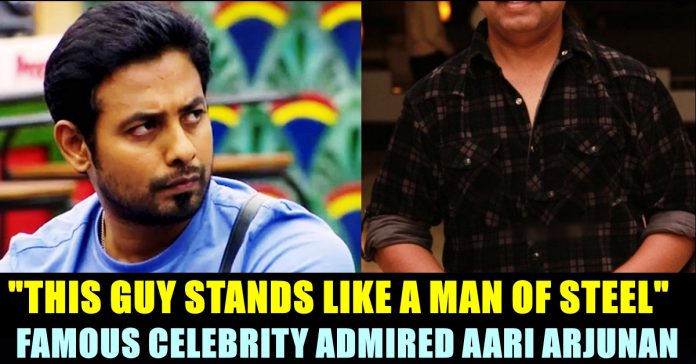 Aari Arjunan one of the toughest contestants inside the Bigg Boss house, is facing the heat as the show is nearing its end. Almost all the contestants who are competing for the title are locking horns with the “Maaya” actor. They are also nominating him for the eviction but with the help of his huge fan base, Aari is managing to survive inside the house. Now, popular TV host and music director James Vasanthan who is known for composing music for the cult classic “Subramaniyapuram”, has uploaded a post wondering how Aari is managing such animosity from all the directions with such mettle. He firmly said that Aari is the title winner through his post.

James said that he couldn’t imagine himself under such situation Aari is in where his co contestants are despising him tricking him, accusing him and conspiring against him. The music composer believed that Aari is attacking the issues around him but his co-contestants are attacking him personally. “In spite of facing all these for the last 75 days, he’s still arguing and debating on merits. He attacks issues but those around him attack the person that he is.” his post read.

James said that the emotions of people who are locked up would boil and their egos would swell due to the atmosphere they are in. He also said that their self esteem would struggle that one would become inconsistent in their thoughts and actions and their road to finish would look murky due to the intimidation from various quarters.

“Where everyone witnesses their own plans and strategies come tumbling down this guy stands like a man of steel. For some it may seem easy, but I’m overwhelmed.” James wrote to express his admiration towards Aari.

After working as an anchor for over two decades, James Vasanthan debuted into film industry as a music composer. He also started his filmmaking career in the year 2015. His film ‘Subramaniyapuram’ which went on to become a blockbuster brought him into prominence with the film’s songs and background score gaining fame and being praised and his “Kangal Irandal” became a huge hit among the youngsters.

Despite of getting nominated for several times for the eviction, Aari is getting saved by the audience for the way he is playing his game. During a rift that took place between himself and his co-contestant Balaji Murugadoss, majority number of people supported Aari. After Archana’s eviction, Rio raj and Soma shekar blamed Aari. Ramya pandiyan and Anitha Sampath also confronting the individual for various reasons.

In the most recent promo, Rio raj could be seen arguing with Aari over the first spot for the best performer of the task.

Previous articleSeeman’s Statement Against Actors Stirred Controversy !! WATCH
Next articleFans Got Upset On Seeing This Official Replacement Of “Mullai” In Pandiyan Stores !!

Responding to the accusation of Anitha Sampath, Producer Ravinder Chandrasekhar who reviewed the Bigg Boss show in daily basis, came up with a series...

Tamizhan is a 2002 released film which had actor Vijay in the lead role. The film acted as Priyanka Chopra's first ever onscreen appearance...