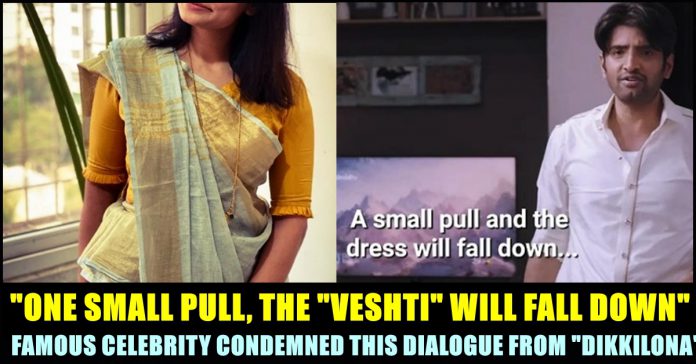 Dikkiloona starring Santhanam, Anagha, Shirin Kanchwala, Harbhajan Singh was released recently, directly on an OTT platform. This science fiction comedy movie has been receiving reviews from various reviewers since its release. A scene in particular has been put into a heavy criticism. With reactions condemning the scene surfacing one side, a number of Internet users could be seen defending it as well.

In the scene, Santhanam advises the heroine, saying that living life as per our likings isn’t freedom. Others should like the way we live and that is only freedom. He also comments on the heroine’s dress. “Your dress will get completely removed if someone pulls it a bit. Is this what you call as “freedom” ??” Santhanam could be seen uttering the dialogue to the heroine who was wearing a sleeveless top. This scene has made people label the movie under the lists of male chauvinism, body & slut shaming.

Many users of social media platform, called out the particular dialogue and condemned the makers of the movie. Few have compared the scene with Vetrimaaran’s answer to a question asked by a person in a public event. In the video, Vetrimaaran could be seen saying that one’s cloth shouldn’t disturb others mentally and even if it does, they should restrain themselves from criticizing the person who wears it..

Now, singer Chinmayi, came up with a series of stories condemning the scene. “One small pull and the Veshti will fall down. You call that . . ?? What now” she asked through her story. Here’s the screen shot of it :

“Freedom- Define that for yourself. And this definition changes as we grow. By the way- Living the way “others accept you” is sure way to failure. For that matter even the lead actor in the film didn’t get a 9-5 job and live in the way “Others expect a man to”. I am sure he doesn’t believe the lines he is spouting in the film. Hope the audience doesn’t too” she said in her next story.

Check out the screen shot here :

Chinmayi also shared the comparison video of Santhanam’s dialogue in the film and the answer of Vetri Maaran.

In her next story, the singer questioned why would someone pull the clothes of others. “The bigger question is why do you want to pull on someone else’s dress ?”her story read.

Previous articleStand Up Comedian Abhishek Kumar Deleted His Recent Reel After Receiving Flak From Internet !!
Next articleJUST IN : Virat Kohli Stepped Down From Captaincy !!

Tamil actress Vijayalakshmi who is pretty much active in social media platforms, recently uploaded a picture with her son in her official twitter account....