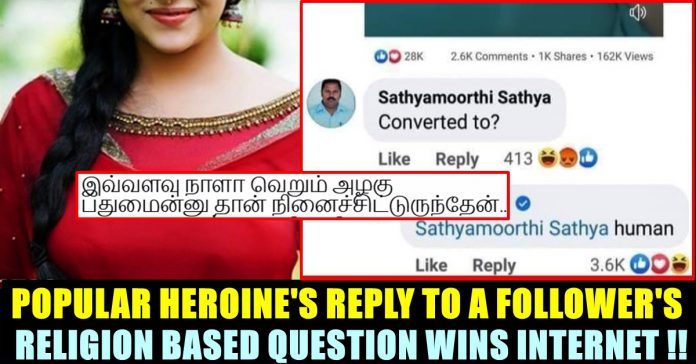 In a way of celebrating the Ramzan Festival, cinema celebrities from all over the country has been wishing the people who belong to the Muslim religion through their respective social media platforms. To wish their followers, many of them uploaded pictures and videos of themselves from the films/photo shoots in which they played the role of a Muslim.

Popular Malayalam actress Anu Sithara uploaded pictures and a video in her official social media handles wearing clothes like every Muslim woman do to wish her millions of her followers. Among the many who came across her post, a follower asked whether she got converted into a Muslim. The short and immediate reply provided by the actress went insanely viral across the Internet with reactions lauding her.

Anu Sithara who predominantly appears in Malayalam cinema, is known for her huge social media fan following. The 26 year old actress who enjoys 7 million followers in Facebook and Instagram combined as of now, was debuted to films through Pottas Bomb as a child artist. Her debut role as a lead actress was in Omar Lulu’s Happy Wedding in 2016. She got married to Vishnu Prasad in the year 2015.

check out some of her recent Instagram posts below :

On Wednesday, Anu came up with a video in her official social media handles wishing everyone “Eid Mubarak”. In the video, the actress was seen wearing a veil around her head like a woman who belongs to Muslim religion and wrote “Eid Mubarak to all🌙” as her caption.

On seeing this video of her, a Facebook user named Sathyamoorthi Sathya came up with a question asking whether the actress is getting converted into a Muslim. The comment garnered huge attention after Anu delivered her single word reply. To the comment with which he asked “Converted to?”, Anu replied saying that she got converted into a Human and made it clear that every religion is same to her and being Human is importantly above all.

Check how wide Anu’s reply reached and the level of impression it made in Internet :

Previous articleTV Actress Soundarya Exposed A Pervert By Sharing Screen shot !!
Next article“You Have Not Only Betrayed Kamal But Betrayed The People Who Voted For You” – Sanam Shetty