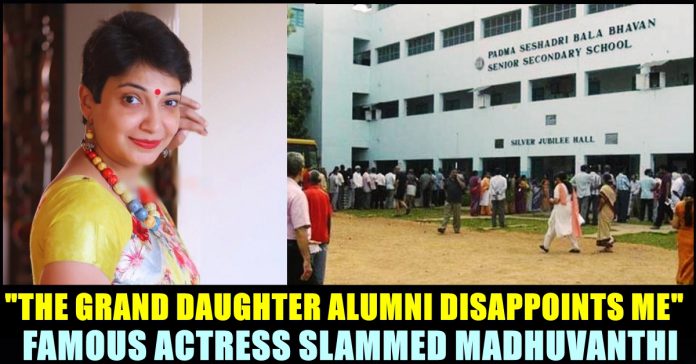 Veteran actress Sri priya uploaded a tweet condemning the management of Padma Sheshadri Bala Bhavan school, saying that they are at fault either way. She who is known for pairing up with Rajinikanth and Kamal Haasan during her prime, expressed her disappointment over the reaction of Madhuvanthi, grand daughter of the school’s founder Mrs. Rajalakshmi Parthasarathy, over the issue.

Latest report about the arrest of Rajagopalan has said that he made a confession about sharing the obscene videos of students to his fellow teachers. Police have decided to inquire other teachers of the PSBB school. Earlier, Police arrested Rajagopalan under POCSO along with 5 other acts and the investigations are underway after hundreds of students came up with complaints accusing him of sexually harassing female students.

Actor YG Mahendran, son of the school’s founder Mrs. Rajalakshmi Parthasarathy reacted to the issue by sending a mail to the authorities of the school management. Meanwhile, YGM’s daughter Madhuvanthi released a video and took part in a twitter space to express her opinions regarding the ongoing issue.

In a video, Madhuvanthi said that she won’t let the legacy of her grand mother to spoil at any cost and added that she is related to the school only as an alumnae. “The accused must be punished legally, there’s no second thought about it for me or for my father.” said Madhuvanthi and also asked people not to involve caste and religion in this issue.

In a Twitter space, title of which read “Are educational institutions being attacked”, Madhuvanthi said “As soon as the election result was out, they made me aware of it. It is expected. People who belong to Dravidian parties are targeting schools like Padma Seshadri and spreading Anti Brahmin wave for 50 long years now. They need Brahmin girls if they want children for their future generation. They also need Brahmin collectors, Brahmin lawyers and Brahmin doctors to hear suggestions from. But they will oppose Brahminism”

“They started targeting me effortlessly. They even started a separate page named “Madhuvanthi Troll” to make fun of me” she further said in the space, screen recorder of which did rounds in the social media platforms.

Here’s how Madhuvanthi replied to a girl who asked how she is talking about “educational institutions being attacked” when the issue is about a teacher misbehaving with the students :

Here’s the recording of it. pic.twitter.com/4DM2nMbMX6

Now, reacting to the issue that took place surrounding the harassment of PsBB school teacher, veteran actress Sri priya wrote “PSBB…either way you are at fault…if known earlier&had not reacted or if you had not monitored what’s happening in your school.” in her tweet.

Regarding the Madhuvanthi’s approach towards the issue, Sri priya said “The issue is even more cruel when a WOMAN a MOTHER add to it an EDUCATIONIST reacting weirdly! The grand daughter alumni disappoints me” through her tweet.

#PSBB…either way you are at fault…if known earlier&had not reacted or if you had not monitored what’s happening in your school. The issue is even more cruel when a WOMAN a MOTHER add to it an EDUCATIONIST reacting weirdly! The grand daughter alumni disappoints me😡

MS Dhoni Returned As Captain For India !! Fans Stunned & Celebrating To The Core !!

Team India has managed to surprise and shock everyone with their team selection for their inconsequential game against Afghanistan. Rohit Sharma and Shikhar Dhawan...

A viral video that shows a woman pointing out the regressive aspects of the recently released Vijay film "Varisu" is doing rounds in social...