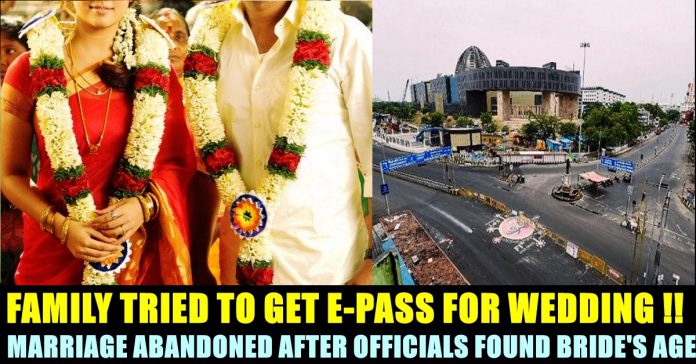 A complete lockdown has been implemented in four prominent districts of Tamil nadu till 30 of June to avoid the spread of virus in the state. However, people with immediate requirement can travel from district to district by getting an E-pass from the government after informing them about the cause of their travel. Using this opportunity, many people who planned for marriage months earlier and people who are required to attend funerals or visit their dear ones for immediate causes are getting an E-pass from the government by submitting proper documents.

Now, a family from Ponneri in Thiruvallur district which tried to apply for an E-pass for their daughter’s wedding in Cuddalore, forced to abandon the marriage due to legal reasons. A childline helpline officer, reported to media saying that the marriage was scheduled to take place on Wednesday. “But, from the information which was provided by the parents in the application, E-pass authorities found that the bride is still minor.” said social welfare department. The Aadhar identity of the minor showed that she was born in the year 2003, according to reports.

Tahsildar Balamurugan came across an e-pass application for traveling to #Cuddalore on grounds of marriage.The Aadhar card of the applicant (the bride-to-be herself) showed that she was born in 2003.He grew suspicious and eventually averted a child marriage. #COVID19India pic.twitter.com/nJTgJafUnb

Another attempt of child marriage was stopped recently after Chidambaram sub-inspector received a tip-off about the incident. Sources informed that the family members of a 14 year old girl tried to get their daughter married to a 23 year old youth and the marriage was stopped at Karmangudi village near Srimushnam on Wednesday by the officials.

“On receiving a tip off, Chidambaram sub-inspector reached us. We, in return, took help from police and stopped the marriage which was happening at the groom’s residence with the presence of a few relatives. The child was rescued and a written statement against child marriage has been procured” said the report of TNIE.

As soon as the news surfaced, it went viral in the social media platforms with many people mocking the family members of the children. As far as COVID 19 in Tamilnadu is concerned, so far 70, 977 positive cases were reported and 911 people died of the virus which killed 4 lakh 89 thousand people across the world. It is high time for people to realize the importance of social distancing and stop arranging marriage for their children to save money using this pandemic situation.

Previous articleKhushbu’s Unexpected Reply To A Guy Who Made Inappropriate Comment In Her Post !!
Next articleKollywood Celebrities Started Raising Voice For Jayaraj & Fenix !!