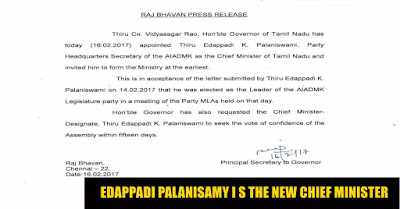 Experts Would Have Told Her To Go With A Party Veteran. Sasikala Had Other Ideas-10 Points

The Tamil Nadu political fever has finally decided to ease after the issue by the governor stating Palisamy to be the new Chief Minister. Here’s what happened in the AIADMK party in ten points.

1) Sasikala who ought to be the Chief Minister was sentenced to 4 years of jail and 10 years banishment from competing in elections. The tide was thought to be shifted towards OPS’s favor, but in the end it never did.

2) Before starting to serve her sentence in the jail, Sasikala introduced TTV Dinakaran as the party’s general secretary. Later it was clarified that he’d serve as the deputy general secretary and that Sasikala would hold office despite being in the prison. TTV Dinakaran’s inculcation was clearly unwelcome by the public but the AIADMK supremo seems she pays no heed to it. A party veteran would have been a better option instead.

3) Sasikala spent her first night at the prison despite discomfort, says the party officials. She is being treated as a normal inmate despite her huge reputation within the AIADMK council. Her requests to be treated as a VIP or to administer any special benefits was turned down by the court.

4) Sasikala and Ilavarasi who were placed in separate prisons are now in the same cell as per request from some one in the higher cadre of power. Sources say that ‘the someone’ is actually Natarajan.

5) While it was expected of Thambidurai to become the candidate for Chief Minister, tides were turned as Edappadi Palanisamy was made the third Chief Minister in the last 4 months.

6) Panneerselvam addressed this situation stating that the power is within the hands of those responsible for Jayalalitha’s death and he’d make sure that the righteousness would prevail over the dark. None is willing to talk about the current dilemma the state is facing.

7) After TTV Dinakaran being made the party’s deputy general secretary, sources say that the prowl of Mannargudi Mafia is getting more dense within the AIADMK party. Random talks with people also concluded that there maybe a high chance of Natarajan getting ready to hold the reins of the party, indicating clearly that the party’s inculcated a motto which the former Chief Jayalalitha never liked- inducing Sasikala’s relative into party’s affairs.

8) Governor on 16th February by 11;30 AM called Palanisamy to the Raj Bhavan. Later it was announced that he’d become the new Chief Minister.

9) Palanisamy along with 31 Ministers are expected to take charge today.

10) Palanisamy would be the Chief Minister for 15 more days after which he has to prove his majority in the legislature. Failure of which would result in his post being taken away and pave way for a composite floor voting.

Previous articleHow Sasikala Became Pauper From Being A Topper Overnight Explained In 10 Steps
Next articleFirst Time A Chief Minister Is Sacked By An Ex Party Veteran And Other Important Happenings.

"Premam" director Alhone Puthren is pretty much active in social media platforms ever since the lockdown was implemented. He recently conducted a chat session...