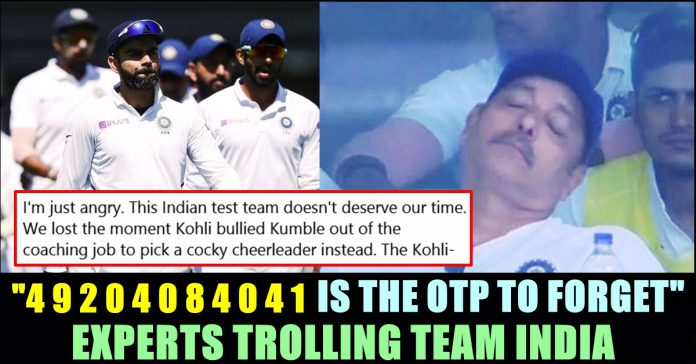 In an unexpected twist in the first test match between Australia and India, Team India’s batting line up collapsed like never before and got all out for just 36 runs. No Indian batsman registered a double digit score and made a record of being a team with lowest test total in an innings. It all started with Bumrah’s soft dismissal. He came in as a night watchman on the second day of India’s second innings.

Fans of India and experts couldn’t believe what they just witnessed which is evident through the feed of social media platforms. Virender Sehwag, former opener of Indian team trolled the batting performance of the team by writing “The OTP to forget this is 49204084041” in his tweet. The numbers he mentioned in his tweet are the scores of the Indian batting line up.

“It is happening. It isn’t a nightmare….” wrote Harsha Bhogle in his tweet to define the situation.

It is happening. It isn’t a nightmare….

Many other fans who watched the match started venting their emotions out by creating memes and writing posts. Some them demanded the BCCI to appoint Rahul Dravid as head coach removing Ravi Shastri.

Mayank is the highest scorer
his efforts are like👇👇#INDvsAUSTest pic.twitter.com/OLExdA8NXT

The only way not to suffer this embarrassment again is to remove this good for nothing coach with someone who is counted as one of the legends of the game…Give this shastri a bottle of wine and just throw him away 🤦🏽‍♂️#INDvsAUSTest #RaviShastri pic.twitter.com/kCjsq2MJUf

It’s time to bring in Rahul Dravid as the head-coach and handover the test captaincy to Rohit Sharma as well! #AUSvIND @BCCI #TeamIndia @SGanguly99 https://t.co/BSuEOuMrkU

When you see Bumrah has faced more balls in an innings than Shaw, Pujara, Kohli, Rahane, Saha.#AUSvIND pic.twitter.com/qsndqyLeuM

#36allout The date 19th December’2020 shall be etched in history as India has broken it’s 46 year old record of its lowest Test score of 42 vs England at Lords on 20/06/1974. Well done #TeamIndia @imVkohli @RaviShastriOfc

#INDvsAUSTest
India
9/1 in the morning

I’m just angry. This Indian test team doesn’t deserve our time. We lost the moment Kohli bullied Kumble out of the coaching job to pick a cocky cheerleader instead. The Kohli-Shastri combo has turned a talented generation of batters into vacant “intent” hogs. We deserve better.

So far, Australia hasn’t lost a wicket and scored 51 runs in 12. 2 overs. They need 39 more runs to win in the two and half days left. Comment your views.

How Much “Valimai” Collected So Far?? Official Word From The Producer

During his announcement on the OTT release of Ajith's recently released "Valimai" film, producer Boney Kapoor opened on how much the film collected in...

Lyricist Vivek Not Agreed With This Comparison Of Vijay Fan For This Reason !! CHECK Why !!

One of the highly anticipated films of the year is Atlee directorial Bigil. The sports drama will see Thalapathy Vijay in dual avatar....