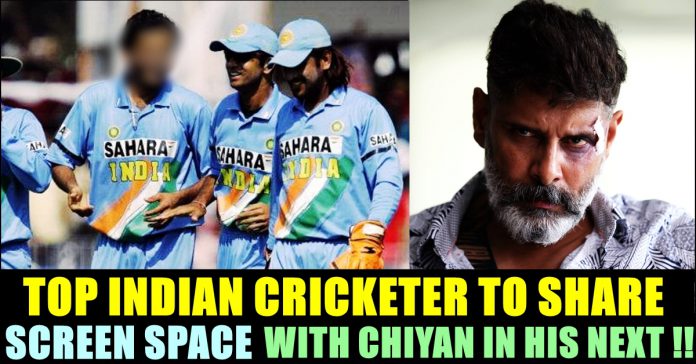 Cricketers acting in movies is something which is very rare compared to actresses marrying cricketers. In previous occasions, cricketers such as Sadagopan Ramesh, Lakhman Sivaramakrishnan made it to the big screen but didn’t last long in the industry.

Recently we have reported that controversial fast bowler Sreeshanth in making his Kollywood debut in a movie of Hansika Motwani as antagonist. Now, to our surprise, top all rounder and the favourite of many fans of Indian cricket who are watching cricket since early 2000s, Irfan Pathan is going to make his Kollywood debut.

The most exciting announcement is that the cricketer is going to share screen space with one of the top hero of tamil cinema Vikram who is fondly called by fans as “Chiyaan”. “Demonte Colony”, “Imaikka Nodigal” fame Ajay Nyanamuthu is going to direct the movie which is tentatively titled as Vikram 58.

The production company took twitter to make this announcement. In their post Seven screen studio wrote “Proud and honoured to introduce
@IrfanPathan in #ChiyaanVikram58 in a super stylish action avatar!! Welcome on Board Sir and Wish you a sensational debut👍🏻”

The crew began shooting for the project earlier this month. Produced by Seven Screen Studio and Viacom 18 Studios, Vikram 58 will have music by AR Rahman, cinematography by Sivakumar Vijayan, and art by Amaran. It is rumoured that Priya Bhavani Shankar will play the female lead.

Irfan is going to do a role of a Turkey Police officer according to Crictracker. The cricketer while speaking about making his debut in Kollywood said that the filmmakers are very much confident in him doing the role. The cricketer is currently doing commentary for the ongoing India-South Africa series.

Vikram, the protagonist who was last seen in “Kadaram Kondan” under Kamal Haasan’s banner is going to be seen in big screen in 2020 with this movie.

What do you think on Irfan acting in films ?? Comment your views !!

Previous articleWATCH : Meera Mithun Says That “We Are The Boys” Gang Loved Her !!
Next articleFollowed By Sreeshanth, Irfan Pathan, This CSK Player To Debut In Kollywood !!

Rashmika Mandanna Got Upset Over Her Fans!! Video Goes Viral

A video of actress Rashmika Mandanna getting visibly upset over her fans for not wearing helmet is going viral in social media platforms. In...