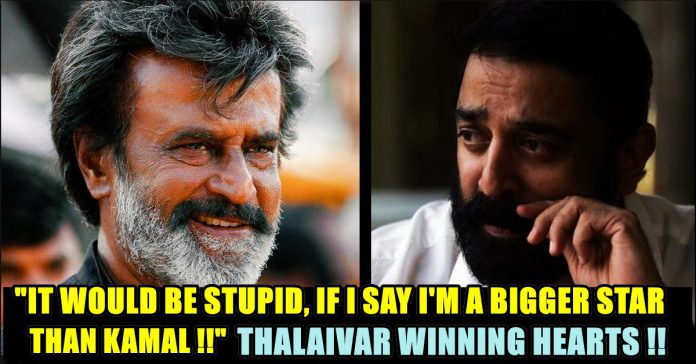 Rajinikanth, is an Indian film actor and politician who works primarily in Tamil cinema began  acting in plays while working in the Banglore Transport Service as a bus conductor. In 1973, he joined the Madras Film Institute to pursue a diploma in acting. Following his debut in K.Balachander’s Tamil drama Apoorva Ragangal. (1975), his acting career commenced with a brief phase of portraying antagonistic characters in Tamil films.

Now his career in Tamil  cinema which spanning more than 40 years gained him a lots and lots of fans and followers. His charismatic screen presence and unique dialogue deliveries was imitated by almost every one in the state of Tamilnadu at one point of their life time which shows his place in Tamilnadu film industry. His tag name “Superstar” was kept considering the whole nation which is evident through the Bollywood actors calling him by the same tag.

Now he finished his shooting for the films 2.0 and Petta, two of the most expected films of this year. His last film Kaala was a blockbuster and a got acclaimed critically as well. The actor who is planning to start a political party was criticized by many after announcing his decision. But after a long time now his Diwali interview to Zee Tamizh winning hearts already as he appeared with the same charisma and smile in his face which is always loved by his fans and people of Tamilnadu.

Archana Chandhok is the talk of the town. Her interview on Zee Tamil was widely appreciated for bringing out the lighter side of the superstar.  She made him so comfortable and audiences too loved the way she was jovial and at the same time very sweet and to-the-point without behaving like a fan herself. Rajinikanth seem to be so comfortable that he spoke a lot of things including his bond with Kamal Haasan, humility, and his personal life.

When the anchor asked why he always glorifying Kamal in his movies, Rajinikanth politely said “While I’m entering the film industry he is already a biggest star among college students and girls. He was very much talented in each and every field of an actor including dance and performance. Even I admired him in the initial stage of my career. After that with the blessings of god and fans i reached this height. Saying now that I have reached heights more than him would be stupid” said the Superstar in ahumble manner.

Why he is THALAIVAR!! Nobody else comes close https://t.co/8KWyoDc8LG

Superstar Rajinikanth saw the interview on Diwali and he is said to be super impressed with they way his thoughts were presented. The actor also got many positive comments from his friends and families regarding the interview.  The actor invited Archana and the entire crew to his Poes Garden residence for a photo opportunity. Rajinikanth is said to have spoke with the team around 30 minutes and also gave an autographed vintage pic of him. On the film front, Rajinikanth’s ‘2.0’ is all set to release on November 29.

Can’t Keep Dinesh Karthick Away From Talking Tamil In Mic !! This Video Is An Absolute Bliss !!

Are we past our days of listening to MS Dhoni's constant banter over stump-mic, making cheeky digs at his fielders and unsettling batsmen using...

fforts to rescue a two-year-old boy Surjith trapped in a borewell near Tiruchirappalli has entered Day 4 with officials saying the child has fainted,...