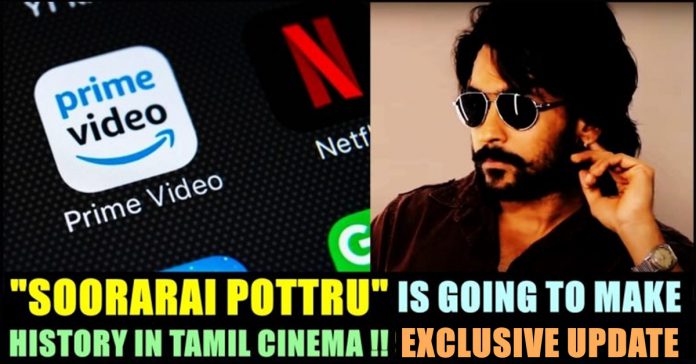 A strong buzz surfaced regarding the release of Surya’s most expected film “Soorarai Pottru”. Being directed by Sudha Kongara who stunned audience with her “Irudhi Chuttru”, the film is bankrolled by Suriya himself under his 2D entertainments. Due to the corona outbreak, movies which are awaiting for theatrical release, are likely to get postponed without further notice. It has been reported that theatre owners in Tamilnadu are going to renovate their theatres, in a way of helping the audience to maintain social distancing in their space in order to make them visit like before.

However, movie makers of Kollywood have different ideas it seems. It has been almost confirmed that actor Surya’s Soorarai Pottru is going to release in OTT platforms and the makers of it are eyeing for a perfect timing to release their film. The film which is believed to be a biographical picture of Air Deccan founder G.R Gopinath, is touted to be a coming of age biographical drama. It is notable that Gopinath is a retired Captain of the Indian Army, an author, and also a politician.

Kamal Haasan’s vision of releasing movies directly in DTH is slowly coming into practice, we must say. When the filmmaker tried to release his movies through Direct-To-Home, Tamil film fraternity literally thrown him out of the industry. Now, as the 2020 is progressing, many Tamil films and webseries made by renowned makers are emerging in online platforms. To our surprise, films are even releasing in online platforms before completing its theatrical run. Kamal Haasan tried to release his Viswaroopam in DTH and failed and he is also planning to release his unfinished “Marudhanaayagam” in OTT.

Now, “Dharala Prabhu” of Harish Kalyan and Vivek which is streaming in Amazon Prime, had a theatrical run for just 6 or 7 days. Due to the lockdown crisis, the producers of it decided to release it in OTT platform instead of re-release as the entire nation is in quarantine. “Kaithi” of SR Prabhu released in hotstar before completing 30 days of theatrical run. Gautham Menon, a 17 film old refined filmmaker made a web series named as “Queen” for ZEE 5. These vast changes evidently proves that OTT platforms are going to acquire the future of Tamil film industry in big time.

A huge competition between leading online platforms such as Netflix India, Amazon Prime, Zee 5 and Sun NXT is likely to take place to buy “Soorarai Pottru” as the film is going to get a direct online release. All the above mentioned online platforms are ready to buy the film for a huge price to make history in the 89 year old Tamil cinema.

The makers are planning to release the film post lock down and looking for a right time. To break the norms of Tamil films getting released only in theatres, OTT platforms are ready to pay crores of money extra to buy Soorarai Pottru it seems. The film’s one minute eighteen seconds long teaser shows Suriya in three different looks and garnered more than 10 million views in youtube so far.

As people would think twice to spend money to watch movies in theatres post lockdown, actor Surya who also produced the film, made this decision it seems. If a film like “Soorarai Pottru” which contains high profile names such as Surya and Sudha Kongara gets an online release, it would definitely change the fate of Tamil cinema, says Cinema experts. However, as Kamal Haasan once said, though people are witnessing Gods in their daily calendars, they won’t stop visiting “Tirupati Devasthanam”, similar to which, people won’t stop watching movies in cinema halls, due to the arrival of OTT platforms.

Previous articleHow Lokesh Kanagaraj Restricted The Budget Of “MASTER” ??
Next articleCSK’s Savage Reply To Kevin Pietersen Made Fans To Laugh Out Loud !!

As Soon As Winning The Election, Prime Minister Modi Removed “Chowkidar” From His Twitter Account !! Check Why !!