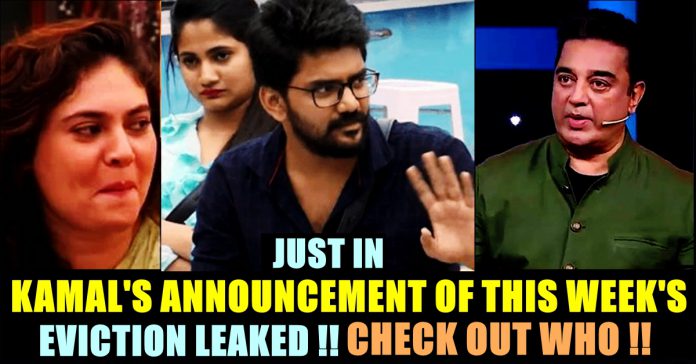 Amidst of Indian 2 shooting in Andhra Pradesh and press meets about current social issues, Kamal Haasan managed to attend the shooting of Bigg Boss’s weekend episode which was held in EVP film city, Poonamalle. The actor hosted the show with ease as usual and roasted the contestants in his own way.

Bigg Boss Tamil 3, the Ulaganayagan hosted reality show, is just a few days away from the grand finale. As the reality show is inching closer to the finale, the contestants are being tested by Bigg Boss in every possible way. The latest episodes of Bigg Boss Tamil 3 contains intense tasks yet competitive as housemates were given multiple tasks for the ‘ticket to finale’. In the weekend episode, Kamal entered the house and gave the finale ticket to Mugen who excelled in the 8 given tasks.

Meanwhile, the evicted contestant was also announced by the “Hey Raam” actor in the weekend episode which is going to be telecasted today. Director/Actor Cheran, who got evicted already has been evicted again by the audience of Bigg Boss. He spent 88 days inside the Bigg Boss house which includes 3 days of secret room.

As soon as Cheran got evicted, people in social media started reacting to it. Check out some of their reactions here :

We tried our level best
But we can nothing do with vtv manipulation
Will miss you sir#BiggBossTamil3 https://t.co/SfxI4MrcRF

Now that #Cheran is eliminated, #Sandy is cat on wall, #Kamal taunted #Kavin & #Losliya, #Mugen is safe in finals! Game is becoming very interesting, #Sherin saved first will give full confidence for both #Tharshan & angel! Will go overboard against Kav & Los! Next sketch ready!!

We know cheran cannot give content..but he is wiseman and best person in this BB3.

You eliminated him though he had high votes..seriously its horrible.
Finally let the toilet couple win.

Cheran made an important announcement about his upcoming project during his stint in Bigg Boss house. He said that he is going to start a movie by having Vijay Sethupathi in the lead role which is supposed to go on floors by January. The controversy of himself with Meera Mithun grabbed limelight as she accused him for physical harassment. However, Kamal Haasan in the weekend show made sure that it was just a push within task.

What do you think on Cheran getting evicted for the second time ?? Comment your views below !!

Previous articleFan Said That He Kept “Cut Out” For 1 Lakh & 50,000 !! Getting Brutally Thrashed !!
Next articleTV Anchor Manimegalai Found Her Husband Being “Intimate” With Actress Samantha !! You Must See Her Reaction !!