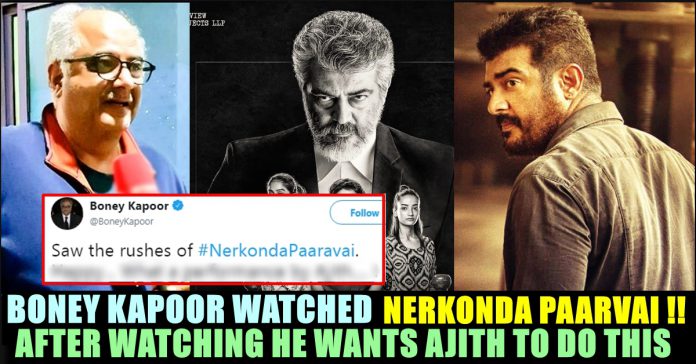 Producer Boney Kapoor on Wednesday invited popular Tamil star Ajith Kumar to Bollywood as he was impressed with his performance in his upcoming production venture Nerkonda Paarvai, the Tamil remake of Pink.

Boney Kapoor forayed into the southern market with Nerkonda Paarvai, which stars Ajith in the role of a lawyer. “Saw the rushes of Nerkonda Paarvai. Happy. What a performance by Ajith. I hope he agrees to do Hindi films soon. Have three action scripts; hope he says yes to at least one of them,” he tweeted on.

Saw the rushes of #NerkondaPaaravai. Happy… What a performance by Ajith…. I hope he agrees to do Hindi films soon. Have 3 action scripts, hope he says yes to atleast one of them. #NerkondaPaaravai #Ajithkumar

The makers began shooting Nerkonda Paarvai in Chennai last December, and recently, the shooting was wrapped up. Directed by H Vinoth of Theeran Adhigaram Ondru fame, this project, scheduled for an August release, marks Vidya Balan’s debut in Tamil cinema. Ajith, who has predominantly worked in Tamil industry, had starred in a key role alongside actor Shah Rukh Khan in Asoka, his sole Hindi outing.

Apparently, it was late actress Sridevi’s wish that Ajith does a film in her husband’s production.

“While working with Ajith in English Vinglish, Sridevi had expressed her desire that Ajith does a Tamil film for our home production. Nothing exciting came up till one day last year; Ajith suggested remaking Pink in Tamil. She immediately agreed as she thought it was the most appropriate and timely film to make and Ajith would bring all the elements required to make it into a great Tamil film,” Boney Kapoor had previously said. Meanwhile, reports suggest Ajith and Boney Kapoor will, once again, team up for a commercial film, to be directed by Vinoth.

Nerkonda Paarvai is a phrase taken from Bharathiyar’s poem Pudhumai Penn, and the celebrated body of work describes the qualities of a modern woman. According to Bharathiyar, modern women walk with their heads held high, and look everyone in the eye.

Michael Vaughan Said Virat Kohli Must Be Rested From IPL !! This Tamil Actor Got Angry !!

Former England skipper Michael Vaughan believes that Virat Kohli should be given some time off ahead of the World Cup 2019 as Royal Challengers...

Fans Got Upset Over Messi For Stopping Croatia Model From Keeping Her Promise!!

A promise made by former Miss Croatia named Ivana Knoll about going naked if her team enters the finals, is no longer valid as...