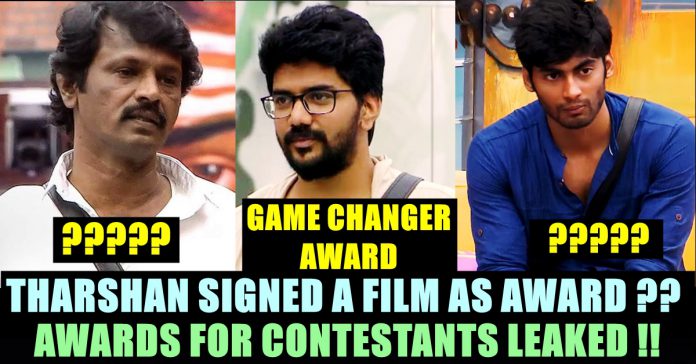 Bigg Boss Tamil is going to see its 3rd winner today. The first season of 100 days show which was hosted by Ulaganayagan Kamal Haasan was won by Arav who is making his film debut through a film named as “Market Raja” this year. The second season was won by Riythvika who is known for appearing in films like “Madras”. She released her film’s trailer in the Bigg Boss house.

As the third season is reportedly won by Malaysian model and singer Mugen Rao, Sandy became the runner and the third prize was received by Losliya according to sources. As a part of Sunday’s finale shoot was done yesterday, the other award categories and the winners of it was leaked.

The awards was issued to the contestants who got eliminated before the final week. As per source, The game changer award went to Kavin as his decision of getting out of Bigg Boss house with offered 5 lakhs made major impact. Followed by his decision Tharshan got evicted and his fans started supporting Losliya which was evident in social media platforms.

Vanitha received an award for having Guts and Grit as she spoke her heart out throughout the show. Arguably, Vanitha grabbed the most number of footages in the 105 days, though she got evicted for two times by the audience. Vanitha confronted with almost every contestant during her Bigg Boss stint.

To our surprise, Tharshan, whose eviction shattered the dreams of his fans, received an award for being an All rounder and he also got a chance to act in a film produced by Rajkamal productions, Kamal Haasan’s own banner.

Check out some of the reactions for the awards received by the contestants :

Wow, the most deserving award for #Tharshan 😌😀👏 & Super awesome news about his movie offer 👌👌

Many Congratulations Tharsh !!😍😍 🎊🎉. Way to go !!👏👏. Wish you good luck and my best wishes for a bright & successful future👍. Keep rocking dude!!

Vijay and director Atlee’s third collaboration, after the successful Theri and Mersal, has been titled Bigil (meaning ‘whistle’ in colloquial Tamil). Atlee released the...