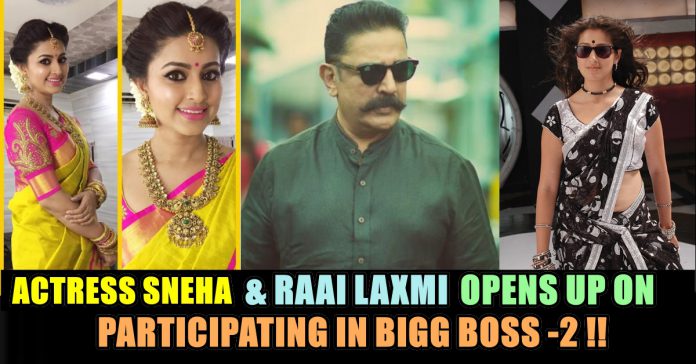 With only a few days to go for the show to begin, pretty actress Sneha have revealed that she is not taking part in the show and called the speculations a baseless rumour. Taking to her social networking page, Sneha posted, “Dear all am not part of biggboss2 . DOT! It’s completely a baseless rumour. Am happy where n what I Am. Wish some of our media friends had courtesy to check with me before spreading such news!” (sic)

Dear all am not part of biggboss2. DOT! It’s completely a baseless rumour. I am happy where n what I am. Wish some of our media friends had some courtesy to check with me before spreading such news! Her husband and Kollywood actor Prasanna retweeted her tweet as a gesture of supporting his wife.

Earlier, there was a buzz in the industry that Raai Laxmi will be part of the second edition. The actress also confirmed on her micro-blogging page that she is not part of Bigg Boss Tamil. Even actress Rambha was also expected to be one of the contestants but that speculation was put to rest as the actress is expecting her third child and will not be able to participate in the show. The first season was enormously popular, the source says that the second season would be even bigger. Kamal hinted at his political journey throughout the previous season and eventually announced that he would join politics, so expect some political announcements in this season, too.

Famous youtuber Irfan reacted to the report of Polimer in which they mentioned him as someone who reviewed the food items of Rosewater restaurant...