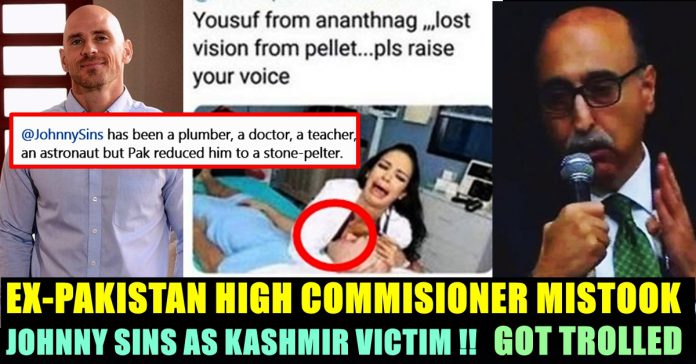 Abdul Basit, the former High Commissioner of Pakistan to India, on Monday, made an embarrassing goof-up in an attempt to convince the public that the Kashmiris on the other side of the Line of Control were being shot down by pellet guns.

The picture that he tweeted was that of popular adult film industry actor and YouTuber Johnny Sins.

Twitterati, of course, did not let go of the opportunity to create memes out of this faux pas after Pakistan-based journalist Naila Inayat published screenshots of the post from her account.

Basit later deleted his tweet.It is not the first time Pakistanis have indulged in such goof-ups. For this tweet, he is getting trolled brutaaly in the micro blogging social media site.

After expose Abdul Basit has deleted the tweet but I have recorded it with the screen recorder.
😂😂😂😂👇👇👇👇👇 pic.twitter.com/296SPy7ESy

Former pakistani high comissioner to India "Abdul Basit" mistakes jhonny sins for a kashmiri man who lost his vission from pellet…
Jhonny sins : Am i a joke to u… pic.twitter.com/FoQK0GGttp

Former Pakistan High Commissioner to India "Abdul Basit" tweets image of adult movie star Johnny Sins claiming he is Yousuf from Anantnag #Kashmir blinded by pellet. @JohnnySins has been a plumber, a doctor, a teacher, an astronaut but Pak reduced him to a stone-pelter. pic.twitter.com/k1rrcnDyOB

Ever since the Government of India announced its decision to abrogate Article 370 which gave special status to Jammu and Kashmir, some Pakistanis have resorted to propagating fake news.

Previous articleLyricist Vivek Not Agreed With This Comparison Of Vijay Fan For This Reason !! CHECK Why !!
Next articleFrench Filmmaker Ultimately Trolled “Saaho” Makers For Copying His Film “Largo Winch” !! ROFL !!

Raiza Crying Outside Theatre Because Of Fans Reaction On Her Debut !! Watch Video !!

After Kamal Haasan's Vishwaroopam 2, Pyaar Prema Kaadhal is the second biggest release of this week. Harish Kalyan and Raiza, who rose to fame...

Due to the constant rainfall in the city, the Chembarambakkam lake, located about 25 km from Chennai, has touched a storage level of 2,781...