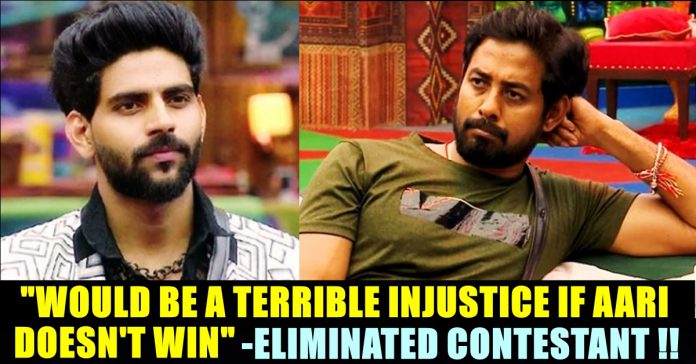 Evicted contestant Suchithra who re-entered the house as guest is campaigned for Aari through official Instagram account after coming out of Bigg Boss house. She said that it will be terrible injustice if Aari Arjunan fails to win the season 4 of Bigg Boss show and uploaded a screenshot of herself casting her 50 votes to Aari.

Singer, Radio Jockey and voice artist Suchithra uploaded a series of posts in her official Instagram account, supporting Aari Arjunan. She took part in the show as a wild card contestant and got eliminated for receiving less number votes from the audience. Lately, she entered the house as a guest and returned from the Bigg Boss house on the noon of Friday.

“Would be a terrible injustice if Aari Arjunan doesn’t win Bigg Boss 4. Whether you are a fan or not, please vote for him” said Mirchi Suchi in her story.

She further uploaded a screenshot of herself casting her all 50 votes to Aari and suggested her followers to vote for him. “I have done what I can, Could you please ?” she asked.

She further revealed about an incident which was not telecasted. Suchi said that Bala disrespected her for calling Shivani his “aalu” and asked people to vote for Aari. “Too bad they didn’t telecast it, but I did have a conversation with Bala where he said I deserve to be yelled at because I called Shivani his aalu. This for all you “Bala fanatics”, Boy doesn’t know respect- he is a user. Hence, please vote for Aari Arjunan, because he is just, I don’t know, divine” Suchithra said in her story.

Before entering the Bigg Boss house as guest, Suchi who had a good bond with Balaji Murugadoss inside the house, stretched her supporting hand to Aari and said that he doesn’t have fear of losing anything including his image. “Aari doesn’t know what fear is. He doesn’t care about how people are branding him inside the house” said Suchi.

Suchithra who entered the house as a “wildcard entrant”, spent three weeks in the Bigg Boss house. While getting evicted, Suchithra said to Kamal Haasan that her father appeared in her dreams and told her to get out of the house as nothing about her was telecasted. She also expressed her fear of mass trolls and criticisms in social media. However, the radio jockey was well received by the netizens after her eviction.

During her final conversation with Kamal Haasan before walking out of the show, Suchi said that Bigg Boss is her most favourite show and added that she entered the house as a fan girl. The radio jockey also said that she wanted to get her singing career back by participating in the show.

After coming from house, she uploaded a poem in her Instagram about “beautiful faces” and “ugly insides”. Through the poem, she narrated her experience she gained by participating in the Kamal Haasan hosting show.

“Figured my sh*t on a tv show, Things that happened, made me go ‘wow’ Ugly insides, beautiful faces, False tears, false graces No pain, no gain they say, And delightedly prod your pain when you’re low
Send you ahead of the queue to Death Row
The audience cheers, the Host takes a bow.
Sometimes you need to get sucked in And spat out, into the now
Injured by blows delivered below
But hey, you get to keep the scars to show!”

Tamil Actress Swathi Replied To Those Who Commented On Her Looks !!

Swathi reddy rose to fame among through her debut film "Subramaniyapuram". Her cute looks and adorable expressions with that half saree in "Kangal Irandal"...