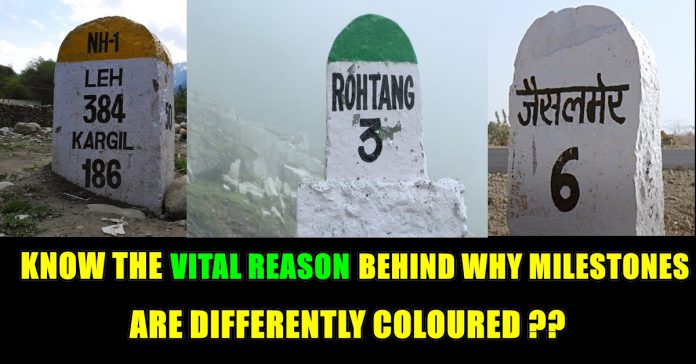 Ever Wondered Why The Milestones Are Differently Colored ?? : The Reason Is Vital That Will Surprise You !!

Traveling time you will see a lot of things on the streets, one of these is the ‘Milestones’ that means ‘Mile Stones’. These stones, along with the name of the place to come forth, are also made of distances and many different types of marks are also made. If you have ever noticed, the color of these ‘milestones’ falling on different paths is also different.

Actually, there is some reason behind doing this. Different colors of ‘milestone’ also mean, if you are still deprived of this interesting information, then we are told that what these stones mean.

If you see a yellow stone on the way while traveling, then understand that you are on the National Highway (National Highway). These highways connect states and cities. NH is maintained by the Indian Government. The National highway is more than 70,000 km long and the North-South-East-West Corridor and Golden Quadrilateral are also formed by these highways. When you see a green strip landmark on the side of the road, then it means that you are not on the National Highway but on the State Highway. In India, when roads are constructed or manufactured by the State then green coloured milestones are used and the maintenance of these roads are done entirely by the State. When you see a milestone with a black, blue or white strip on the roadside, then it is understood that you entered in a big city or district. At the same time maintenance of these roads comes under district or we can say that these roads are maintained only by the administration of the same city. When you see a milestone or a landmark with an orange stripe on the side of the road, then it means that you entered in the village. This strip also represents Pradhan Mantri Gram Sadak Yojana.
From this article we come to know that various milestones are present on the highways of different colour which represents the destination from a certain place. That is whether we are travelling on State highway, National Highway or in villages etc. Previous articleRJ Balaji’s Publicity Stunt Came To Limelight : Here’s The Real Reason Behind His Politics Entering Announcements !!
Next articleAshwin’s Arrogance Towards Yuvraj Singh !! : Twitter Lashes Out Ash For His Act !!

Prime minister Narendra Modi, while addressing the nation on the occasion of 145th birth anniversary of Sardar Vallabhai Patel, quoted a long poem of...

Meera mithun has slammed models and actresses for conducting photoshoots unnecessarily. If you are aware of Bigg Boss show’s third season in Tamil, you...