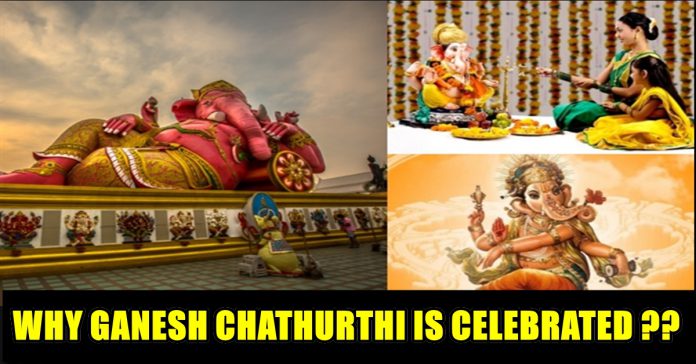 Ganesha is known by 108 different names and is the Lord of arts and sciences and the deva of wisdom. He is honoured at the start of rituals and ceremonies as he’s considered the God of beginnings. He’s widely and dearly referred to as Ganapati or Vinayaka.

There are two different versions about Ganesha’s birth. One has it that Goddess Parvati created Ganesha out of dirt off her body while having a bath and set him to guard her door while she finishes her bath. Shiva who has gone out, returned at that time, but as Ganesha didn’t know of him, stopped him from entering. An angry Shiva severed the head of Ganesha after a combat between the two. Parvati was enraged and Shiva promised Ganesha will live again. The devas who went in search of a head facing north of a dead person could manage only the head of an elephant. Shiva fixed the elephant’s head on the child and brought him back to life.

The other legend has it that Ganesha was created by Shiva and Parvati on request of the Devas, to be a vighnakartaa (obstacle-creator) in the path of rakshasas (demonic beings), and a vighnahartaa (obstacle-averter) to help the Devas.

This year, September 17th marks the beginning of this festival which is also called as Vinayaka Chaturthi. Here are some quick facts about the festival: During the festival, colourful pandals (temporary shrines) are setup and the Lord is worshiped for ten days.

There are four main rituals during the festival – Pranapratishhtha – the process of infusing the deity into a murti or idol, Shhodashopachara – 16 forms of paying tribute to Ganesha, Uttarpuja – Puja after which the idol could be shifted after it’s infusion, Ganpati Visarjan – immersion of the Idol in the river. Foodies wait for Modak, a sweet dish prepared using rice or flour stuffed with grated jaggery, coconuts and dry fruits. The plate containing the Modak is supposed to be filled with twenty-one pieces of the sweet. The festival was celebrated as a public event since the time of Maratha King Shivaji, but a Sarvajanik (Public) Ganesh idol was installed first by Bhausaheb Laxman Javale. Lokmanya Tilak changed the festival from a private celebration to a grand public event “to bridge the gap between Brahmins and non-Brahmins and find an appropriate context in which to build a new grassroots unity between them”. Agni vs Devi is an upcoming political drama film produced and directed by JPR and Sham Surya. The film is produced by JPR and...

Actor Karthik Kumar who is known for acting in several Tamil films, is currently involved in performing stand up comedies. He who is pretty...