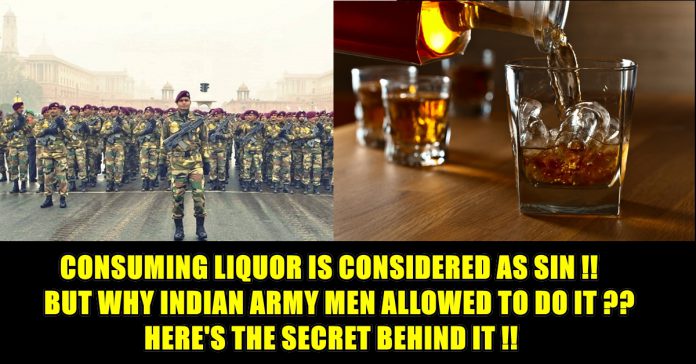 There are many theories regarding why there is a culture of boozing in the Indian Army. The most popular one is that it is a legacy of the British who introduced this vice as a means to ‘control’ the Indian soldiers and to motivate them to fight for the crown in the great wars especially in far off lands from Africa to the thickest jungles of Burma.

Our army men and BSF Jawans lead a very hard and disciplined life. They have to protect our borders and public, so the basic rule for them is staying fit and in high spirit. Surely no one wants a drunk soldier handling a weapon with live ammunition but why liquor is not banned in army as consuming alcohol is considered as sin.

Nobody is allowed to get drunk in the Army. In fact, ‘intoxication’ is a serious offence under the Army Act punishable with imprisonment and even Court Martial in extreme cases.

It is prohibited to consume alcohol from any other source and any violation is dealt with strictly and swiftly. Any individual developing an addiction to alcohol is medically downgraded and provided treatment and if that fails, he is medically boarded out/ invalidated out of the Army. Absolutely NO alcohol is served in operational areas like on LOC in Kashmir, and other border areas or other active areas. Anybody violating this rule is usually Court Martialled.

But you might be heard that army men will drink and the kind of wine they are drinking will be in high quality and also will be imported from foreign countries. They are allowed to have alcohol and here the main three reasons for it.

The first and most genuine reason is the working conditions of Jawans. Our army men perform their duty in some of the really hard conditions and circumstances. They have to protect our land and borders even in coldest of regions where it is very hard to survive let alone standing tall and providing safety to others.

Liquor helps them to stay warm and survive in these conditions So, we can say that it’s almost their basic necessity. Another reason for alcohol consumption is that our Jawans live far away from their families to protect us. In normal time, when they are not busy fighting they get a lot of free time. Alcohol helps them relax in this time and enjoy with their mates.

There are also tradition related reasons. British army had the culture where every officer and army man used to have a fixed amount of alcohol. This tradition was passed on to Indian army and since then it’s being followed. Also when there is a new entry in the force, a toast is raised by everyone as a part of welcoming the officer. But that doesn’t mean, any army man can drink any amount of alcohol on duty. There is only a limited amount of alcohol permitted to the officers and proper registers are maintained to keep the track. If any overdose or intoxication is found then strict actions are taken and even court-martial is done in rare cases.

It’s an individual’s decision but, as far as army goes I don’t see the point of banning alcohol although some prudent regulations would be much appreciated.

Previous articleWOW : Sachin Promised This Special Gift To Kohli , If He Break Sachin’s ODI Century Record !!
Next articleDhoni & Co Had To Leave The Star Hotel Because Of The New Comer Ambathi Rayudu..!!

You Just Can’t Miss These Jokes & Memes On “Waiting For OTP” !!

On Wednesday, as soon as the Government's dedicated website CoWin opened for registrations, nearly 1.33 crore people applied for vaccination, says reports. People who...