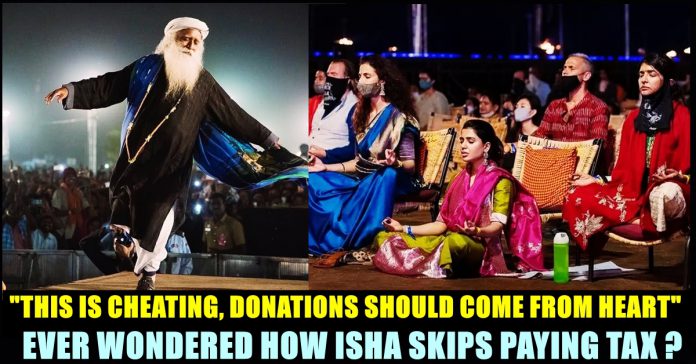 A report on Sadhguru’s Isha foundation skipping paying taxes by using the term “donation” has surfaced. It has been reported that the Isha Foundation of Jaggi Vasudev which is registered in the United States showed a net income of Rs. 56. 43 crore for the year 2018, according to the records of Internal Revenue Service. Rs. 35.81 of the entire amount has been included as donation.

It says that the transactions that took place between Isha foundation and public people/ visitors of Isha foundation/ devotees/customers, are made for a considerable chunk and there are no public records of the foundation’s revenue in India. However, it has been revealed that, at least, few of the transactions are not actually “donations”. It is reported that Isha, is even listing the incomes they gain from selling products as as “donations”, according to the report of Newslaundry.

As we all know, under the Income tax act, Taxes are exempted for public charitable trusts and Isha prefers to label their revenues as “donations” to avoid paying taxes. Isha foundation has been sending “donation receipts” even when they sell a sapling to a devotee/visitor. One such individual named Nagappan Gautham who hails from Dindigul opened about a mail he received after buying saplings from Isha by paying money.

Nagappan says that he bought saplings from the Madurai centre of Isha foundation thrice during late 2017. He bought three saplings for Rs. 14,000 in total which includes one Rs.8,000 worth sapling and two Rs.3000 worth sapling. Nagappan who didn’t require a bill from Isha, received a mail saying that he donated Rs.1242 to the foundation of Sadhguru. The buyer says that it wasn’t a donation but a simple trade and got taken aback after realizing that he was sent a receipt for Rs. 1242 after buying products worth Rs.14,000.

Nagappan also mentioned about the details that he witnessed in the receipt. It showed that he had made a donation to Isha Outreach which was exempted under Section 80G of the Income Tax Act. It is notable that “Isha Outreach” is the foundation’s “social development” wing. He expressed his dejection by dubbing the act of “Isha” as “cheating” and was pretty sure that Isha is saving tax money by terming the money they earn as “donations”.

The report of news laundry mentioned about a complaint made by a person named Jeya Balu against Isha foundation in the year 2014. The Tamil nadu based Swedish citizen had paid Rs. 4,50,000 to the Isha foundation for Yoga sessions and a Yatra ceremony. She got shocked after receiving a bill that mentioned her payment as “donation” and made a complaint at Alandurai police station, Coimbatore. She said that the donation should be made from the heart after making the complaint.

After Isha refusing to pay her money back, Jeya Balu received her money in the year 2015 with the help of a local lawyer and a friend who was running a garment store in Coimbatore.

Similar complaints were made by many other individuals against Isha foundation. A person named Shankar said that the money he paid for a weeklong course was categorized as a donation. He said that they didn’t let him join until he paid Rs. 750 and still branded his payment as “donation” to exempt tax under 80G, according to Newslaundry.

Shankar even made a detailed complaint against the foundation and in reply, he received a phone call inquiring whether he is the one made the complaint. After that one call from the Income tax commissioner, Shankar never heard from, suggests the report of Newslaundry.

Previous articleNaveen & Others Condemned Online User Who Flaunted The Picture Of Mother Cooking With Oxygen Support !!
Next articleFans Slammed BCCI After Seeing The Drastic Difference Between The Salaries Of Women & Men Cricketers !!

To a hater who constantly criticized him blaming the pitch, Ravichandran Ashwin gave him a fitting reply referring to an old incident. Nibraz Ramzan...