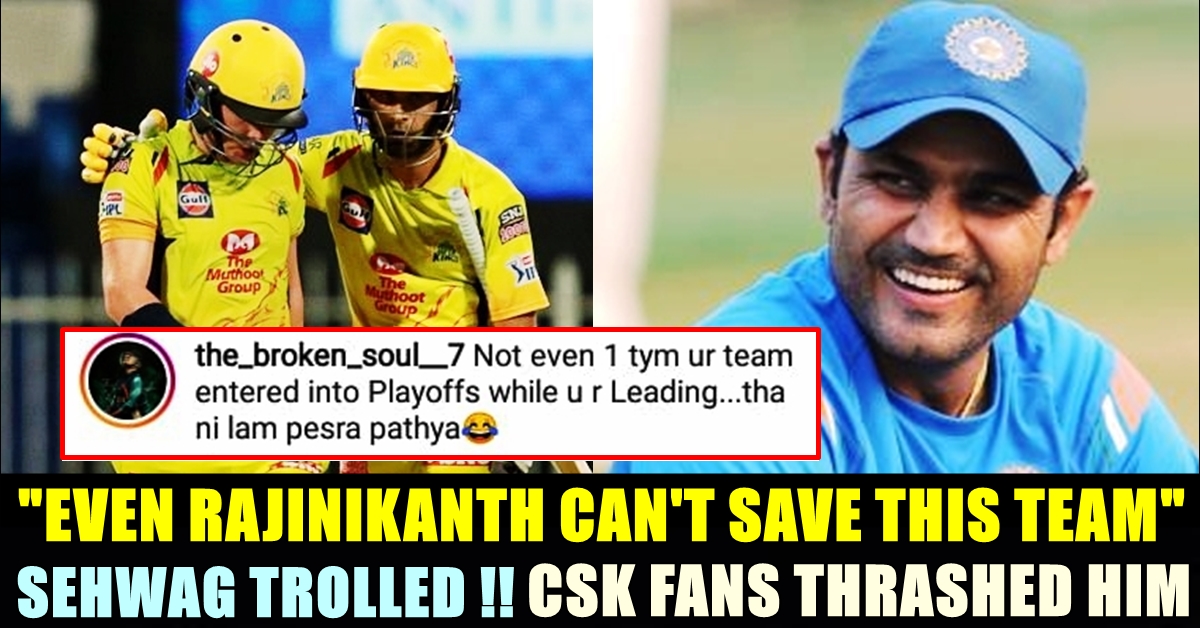 Former Indian opener Virender Sehwag brutally trolled team Chennai super kings for their poor performance in the 41st league of IPL tournament. He imitated Tamil superstar Rajinikanth in his video to troll the Tamil nadu based team. The former cricketer said that even Rajinikanth couldn’t save the team from losing yesterday’s match.

Chennai Super Kings faced a 10 wicket loss against Mumbai Indians on Friday night in their second face off. With this defeat, the team got officially eliminated from the race for the playoffs for the first time in IPL history. After losing 4 wickets for just 3 runs during the first innings, all rounder Sam Curran saved the team from facing the fiasco of being the IPL team with lowest total.

Chasing a smallest total of 114 runs, Mumbai openers Ishan Kishan and Quinton de kock chased it effortlessly with 46 balls to spare in the second innings. This led CSK team to face a huge set back in the net run rate and the team remained in the last spot at the end of 41 matches.

“Chennai asked Rajinikanth’s help to save them. But he himself couldn’t clear the mess. They said that they will do better next time. I don’t know if they meant eating or playing. Everybody wants to chill but no one wants to pay the bill. Even Rajini sir, can’t save this team” he parodied the gestures of the Superstar actor.

Sehwag started his show by asking his followers how could he do a show that lasts longer than an entire match’s duration, trolling how Chennai let Mumbai chase the target in the 13th over itself. “Yesterday, I went to bathroom and by the time I got back, half of your team was already back in the pavilion” he trolled Chennai.

He further said that the fans of team Chennai are wondering if the sound that comes from bat when ball hitting it, is coming from stumps due to their poor batting. He also explained how poorly the top order batsmen of CSK outplayed by Bumrah and Boult.

Sehwad who called “Chennai Super kings” as “Senior citizens club” lauded Sam Curran by saying that he is the only youngster in the team. “Just like we squeeze the last drop out of the toothpaste, Chennai squeezes Sam in the same way.” he said in his video.

Even Rajini'Can't' Save Chennai. Catch the fresh episode of 'Viru Ki Baithak' every morning only on Facebook Watch #CricketTogether

This video of his didn’t go well with the fans of Chennai Super Kings who are missing out the playoffs for the first time in IPL history. “பனைமரம் விழுந்தா பன்னி கூட ஏறி மிதிக்கும்” said a Chennai fan in the comment section of Viru’s post. Check out some of such comments below :

Comment your views on this video of Sehwag and the reactions it is receiving !!