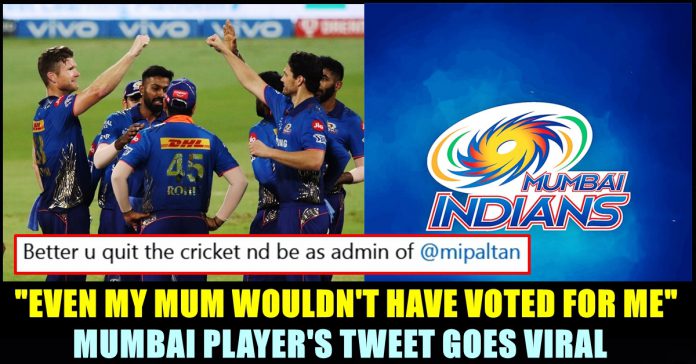 Mumbai all rounder Jimmy Neesham’s tweet on confessing about his poor performance in their last league match is going viral among the users of Twitter. Reacting to a post of the social media handle of team Mumbai Indians, Neesham made the humorous statement. The post declared Ishan Kishan as the Player of the match after comparing his performance with Surya Kumar Yadav’s and Jimmy Neesham’s. Receiving thousands of likes and reactions, the post is going viral among the users of the micro blogging social media site.

We gave it our all but the qualification scenario turned out to be out of our reach. 💔#OneFamily #MumbaiIndians #SRHvMI pic.twitter.com/iJ4C5NbjLp

Prior Match 55, Mumbai needed to win their match against Sunrisers Hyderabad by a margin of 171 runs. Sadly, it is the only scenario for them to qualify. Mumbai would have been eliminated if SRH batted first by winning the toss. So, the blue team were required to score 300 plus runs after winning toss and restrict SRH within 120 runs to qualify for the playoffs.

Keeping the possibilities in concern, MI opener Ishan Kishan started firing right from the start. He smashed 84 runs in just 32 deliveries. Surya Kumar Yadav also batted well for his 82. The team managed to 235 runs at the end of 20 overs. They were required to restrict SRH within 65 runs to qualify for the playoffs. The Manish Pandey led team effortlessly reached the score in their 6th over and officially eliminated Mumbai Indians from the tournament. However, they lost the match to Mumbai Indians.

In Usha Play Paltan’s player of the match contest, Ishan Kishan has been voted as the best player with 81%. Along with Surya Kumar Yadav who scored 82 runs in 40 balls, Jimmy Neesham who picked 2 wickets by conceding 28 runs was also included in the poll. While batting, the all rounder got out in the very first ball he faced.

Reacting to the post, Jimmy Neesham came up with a post writing “Even my mum wouldn’t have voted for me” in a humorous manner.

Even my mum wouldn’t have voted for me https://t.co/S9mU37ucNU

In less than a hour, the tweet garnered 6k plus likes with thousands of reactions. Check out some of them below :

Still i voted for you @JimmyNeesh i maybe the only one i dont knw but no regrets coz i really loved your spell. U deserved the hattrick jimmy.

Better u quit the cricket nd be as admin of @mipaltan https://t.co/FLBHXklh43