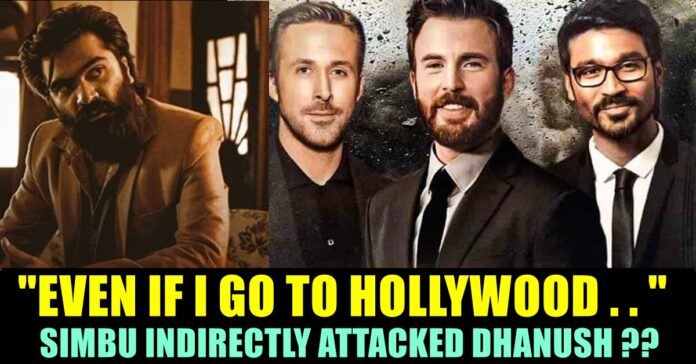 In his recent interaction with film critic Baradwaj Ranganathan ahead of the release of his “Vendhu Thaninthathu Kaadu”, actor Silambarasan opened on his belief over the term “Periya Aal”. The actor said that even if he goes to Hollywood, there will be things for him to achieve and added that doing his work in daily basis makes him a big person. It is notable that actor Dhanush who is considered as the rival of Simbu recenty made his Hollywood debut through a film named “The Gray Man”.

After the success of “Maanaadu”, Simbu is going to be seen in Gautham Vasudev Menon directorial with whom he collaborated before in films such as “Vinnai Thaandi Varuvaaya”, “Achcham Enbathu Madamayada” and a short film titled “Karthick Dial Seidha Enn”. So far, the film is getting positive reviews from the audience and critics. Ahead of the film’s release, Simbu appeared in youtube channels to promote the movie and also interacted with Baradwaj Rangan for Galatta Plus youtube channel. During the interaction, the actor talked about his belief over the “Periya aal” (Big person).

“So, However big I grow,  there’s somebody going to be bigger than me. Even If I enter Hollywood and become Hollywood actor, What next ? Today, I think people are running behind that. They want to become a bigger person. I don’t understand what is “Periya aalu”. I think me doing my job perfectly makes me a big person” the actor says in the interview.

In the audio launch of “Thiruchitrabalam”, Dhanush defined what is “Mass” in Tamil cinema. Simbu, in VTK’s audio launch, had said that audience are the ones who should decide what is “class” and what is “mass”.

Previous articleTN Kids Denied Candies Due To Their Caste !! Man Arrested
Next article“My Husband Was A Woman” – Wife Finds Out After 8 Years Of Marriage Life

An old video of director Mysskin trolling Thalapathy Vijay and his father S.A Chandrasekhar for changing the scripts of filmmakers has got resurfaced in...