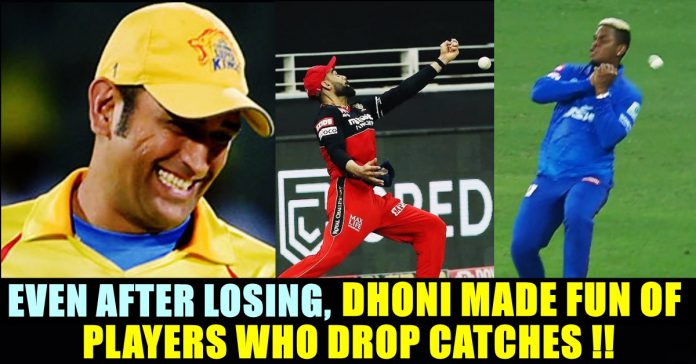 Chennai Super Kings registered their second loss in the ongoing Indian premier league by not chasing 175 runs posted by Delhi capitals on the board. The yet another one sided game dominated by the bowlers of Delhi capitals since CSK came into bat. Murali Vijay and Watson failed to give a proper start and team couldn’t chase the total as none of the batsmen couldn’t connect the ball well to hit maximums. The CSK’s batting innings contained only one maximum.

However, during the post match presentation speech, the way Dhoni made fun of dropping catches has grabbed the attention of the netizens. While talking about the loss, Dhoni said that the wicket did slow down a bit and said that there was no due.

The former Indian captain further said that there was no momentum during the batting innings of his batsmen. “There is no momentum right from the start which hurts because we are already chasing 160 plus and the required run rate keeps on mounting and puts added pressure on the middle order batsmen.” said Dhoni who believed that the upcoming 7 days gap will be a better period to figure out a better combination.

Dhoni complained that the whole bowling department, they have not been very consistent. “You can’t change four bowlers out of five” the cricketer said. “If you are looking to get a one more seamer or spinner, it will add pressure to the batsmen. I feel Rayudu will come back in the next ame which will give us the liberty to try different things” the captain believed.

When he was asked to comment on the dynamic of the ground and light settings of it whether they are making it difficult for the fielders to catch the ball, Dhoni, cheekily said “not to the keeper” with a wide laugh in his face. As we all know, the catches that comes to the keeper would not go in air most of the times.

“Well, not to the keeper.” he said. “But I will ask a few of the players, there have been quite a few dropped catches. But, frankly, if you ask me, much as come to me. And with a bigger glove in hand, it is slightly easy” the keeper said. “It could be, because most of the players didn’t use to play in such lightings. The light is good, it is not like less light. May be the trajectory of the ball, at times, you could get lights in your eyes, that could be reason” Dhoni said.

The cricketer too a sly dig at players who drop catches by saying “Now that you have said, it will be a very good excuse for a lot of dropped catches” the world cup winning captain said.

It is notable that Shimron Hetmyer of Delhi Capitals dropped a couple of easy catches of Faf and they dropped a few more of the same batsman. A day ago, Kohli dropping two catches of KL Rahul which costed the match the his team. Comment your views on this statement of Dhoni !!