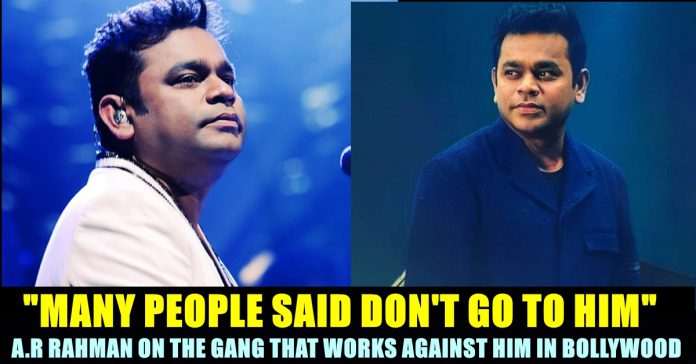 A.R Rahman, pride of Indian cinema has revealed that he is also one of the victims of internal politics that is taking place in every industry. In a recent interaction with Radio Mirchi, A.R Rahman said that there are some people in Indian film industry who doesn’t want him to work for more number of Bollywood films. A.R Rahman won two Oscars for “Slumdog millionaire” which was released in the year 2008. He is the only Indian technician to grab the International award.

Known for his humbleness, A.R Rahman always stayed away from controversies in his cinema career which spans more than 28 years. His calm attitude even after winning Oscar twice, is world famous. He is one of the most loved musician in the world and the people of Tamilnadu are very proud of the fact that he works predominantly in Kollywood industry. However, the main reason behind the musician working for less number of movies in Bollywood industry for past few years has been revealed by himself in a show named as Radio Mirchi’s weekly top 20 celeb special show.

In the past decade, Rahman has done multiple Tamil films but in comparison, fewer Bollywood movies. Radio Jockey Suren of Radio Mirchi asked Rahman why he is not working for more movies in Bollywood while talking about the musician’s “Dil se”, Swades”, “Guru”, “Rockstar”, “Tamasha” and “OK Jaanu”. Answering to his question, Rahman said that there is gang within the industry spreading false rumours against him which he believes as a main reason for the less work of him in Bollywood for past recent times. “I don’t say no to good movies, but I think there is a gang, which, due to misunderstandings, is spreading some false rumours” said Rahman.

The “Roja” musician went to narrate about an incident that took place recently between himself and Mukesh Chabbara, director of recently released “Dil Bechara”. Rahman said that he gave Mukesh four songs in two days. He told me, “Sir how many people said don’t go, don’t go to him (A.R Rahman) and I realized, yeah okay, now I understand why I am doing less work in Hindi films and why the good movies are not coming to me. I am doing dark movies, because there they are doing harm”.

He further added, “People are expecting me to do stuff, but there is another gang of people preventing that from happening. It is fine, because I believe in destiny, and I believe that everything comes from God. So, I am taking my movies and doing my other stuff. But all of you are welcome to me. Makes beautiful movies, and you are welcome to come to me” the musician added.

Sakshi Asked “Sorry” After Coming Out Of BIGG BOSS HOUSE For Calling Public As “Dogs” !! Check These Reactions !!

Every Bigg Boss contestant who gets eliminated from the show would have to face the reflection of their behaviour from the audience after their...