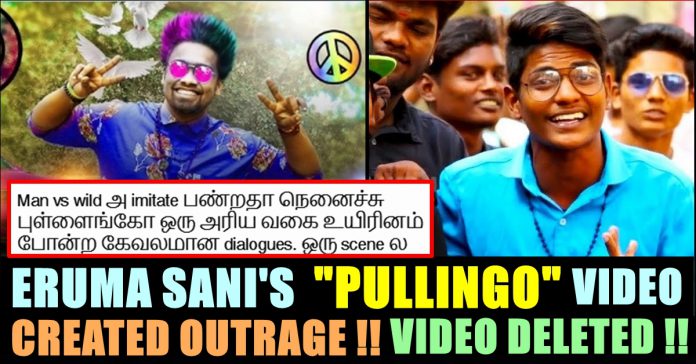 “Pullingo” is a trending term in Chennai to refer the boys who tries to portray themselves as one of a kind. The term became popular once the song “Gumbalaga Suthuvom” which was made by Independent Gana Artist Stephen went viral. Since then many memes and videos based on “Pullingo” started surfacing in Internet.

Now a famous youtube channel named as “Eruma Saani” has posted a video based on “Pullingo”. The video which is now deleted by the channel, contained toxic content which abused those people. The video received severe hatred for its untasteful comment on the separate set of people who are called as “Pullingo”. The video was allegedly made in Bear Grylls’s Man vs Wild format.

“Being started as a meme content, “Pullingo” is now portrayed as a dangerous creatures” said people who saw the video. The video allegedly showed a man making “Pullingo” to pick up their ornaments from roadside in order to catch them. Their racist comments against “Pullingo” receiving severe hatred from the social media users.

Journalist Iyan Karthikeyan posted a video slamming the youtube channel for their toxic content. In his video, Iyan asks the makers of “Eruma Saani” to know about the people who originated from Chennai before thinking of making such contents. “It looks like you are ready to do content out of anything that is trending to earn money.” he says.

Check out some of the reactions surfaced in twitter regarding Pulling video :

Eruma Saani and other such 'sketch' "comedy" video channels are not new to being harmful, abusive and casteist. But the new video by Eruma Saani on YouTube just begs to be reported and removed.

The high viewership of such nauseating videos just kills one's belief on audience.

@YouTube @YTCreators @YTCreators it's Racist & Casteist YouTube Channel.. If @Eruma_Saani have any Guts Come to North Madras & Go Back 😡🔪🔪🔪🔪🔪🔪 if u create Racism, I'm Ready to Kill you 🔪🔪🔪🔪🔪🔪 https://t.co/4XkW9qDIjk

Intha #pullingow concept konju ella meeri poitu iruku.#Parithabangal channel has some good social messages video but even they have segregated them as a seperate group.
Ithu kooda paravala #ErumaSaani you lost your credibility.
Rmba kevalama panirukanga.

This video is Racists AF.

“It was casteist, crass and I felt like wearing a mask due to the amount of toxicity spewing from it” said Singer and composer Tenma, a part of Casteless Collective band to The News Minute.

Previous articlePopular Actress Got Irritated On Seeing “We Are The Boys” Special Show By Vijay TV !! Check Why !!
Next articleRio Raj Gives Back To Kavin Army Which Trolled Him For “We Re The Boysu” Show !!