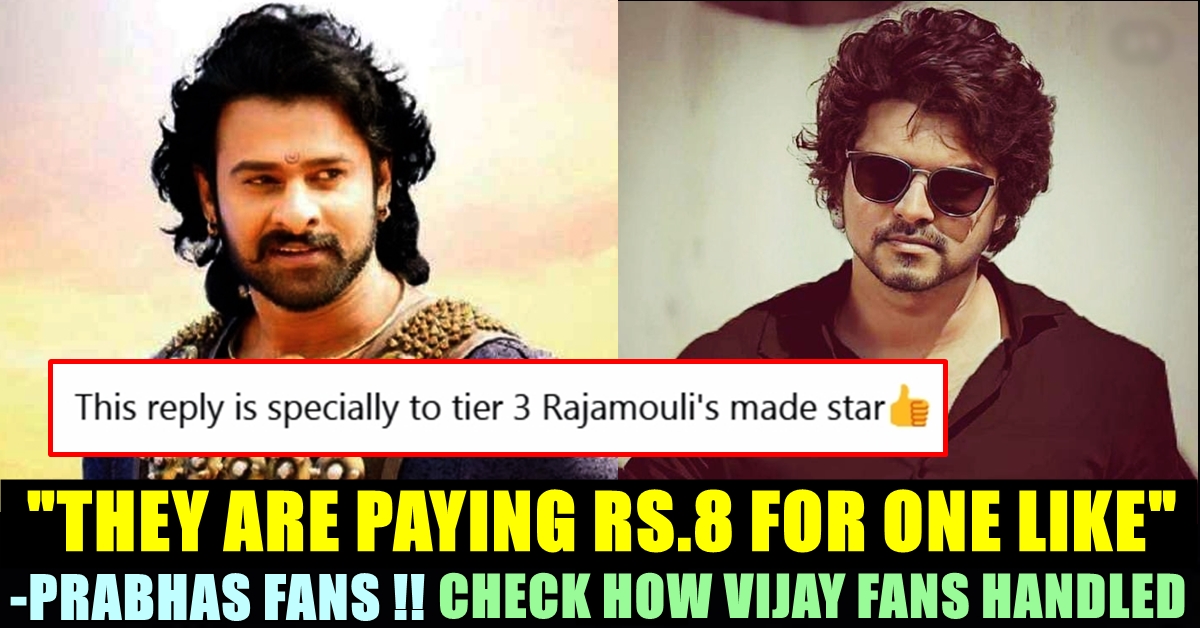 Fans of Telugu actor Prabhas came up with a video saying that the likes received by “Master” teaser in youtube are paid ones. In reply, Vijay fans made the Youtube management to state that “likes” in youtube could not be generated through third party applications and proved them wrong. As soon as proving the fact, fans of the “Ghilli” actor started trolling the fans who made the accusation in the micro blogging social media site.

Fan of two different actors fighting with each other verbally over various topics is not something new. Back then, they got themselves involved in arguments in theatre premises during the release day but now, as theatres are closed, they are fighting with each other through online mediums. Most recently, fans of actors Prabhas and Vijay fought over the teaser of “Master”.

As soon as getting released, “Master” teaser became the most liked teaser in India. Vijay, being an actor with the largest fanbase, breaks at least a few records every time a teaser or trailer from his film is released. So far, Master teaser which was released on Diwali day, garnered 40 million views with 2.4 million likes.

On seeing this achievement of the film, fans of actor Prabhas came up with a video saying that the likes are paid ones. The screen recorder video of a fan named as “Ajay Varma” showed that a single like for the teaser costs Rs.8 and said that Vijay fans are using the mobile application called as “Like” to gain more views. “Master teaser pay per view busted” his caption for the video read.

Many other twitter users who had the photo of actor Prabhas in their display picture, made similar opinions. On seeing this accusation from Ajay, a Vijay fan named as “Thalapathy Vicky” tagged the official twitter account of “Team youtube” and asked whether it is possible.

He asked if it is possible to pay a third party app to increase the likes, views and comments in YouTube. Replying to his tweet, Youtube said “YouTube doesn’t allow anything that artificially increases the number of views, likes, comments, or other metrics through the use of 3rd-party softwares.”

Thanks for the tag – YouTube doesn’t allow anything that artificially increases the number of views, likes, comments, or other metrics through the use of 3rd-party softwares. Here’s a Help Center article for your reference: https://t.co/oJEfEtJHEF. Hope this helps clarify.

In another reply, youtube also clarified that the channel could be striked if the reception of a particular video is artificial. “if the traffic on your channel’s found to be artificial, it won’t be counted and can also lead to strikes on your account.”

Thanks for reaching out – if the traffic on your channel’s found to be artificial, it won’t be counted and can also lead to strikes on your account. You can learn more about this policy here: https://t.co/oJEfEtJHEF

Check out some of the reactions from Vijay fans for this reply of youtube :

#Prabhas fans don’t be jealous & stomach burning on @actorvijay records if you can create records in right way Note : If you can 😂😂😂#Master

Well tried Prabhas fans, but you have failed. Better luck next time. 🙌❤

Contestants Left The Bigg Boss House Due To Flood ??
Fans Demanding This “Kurumpadam” From Kamal Haasan !!