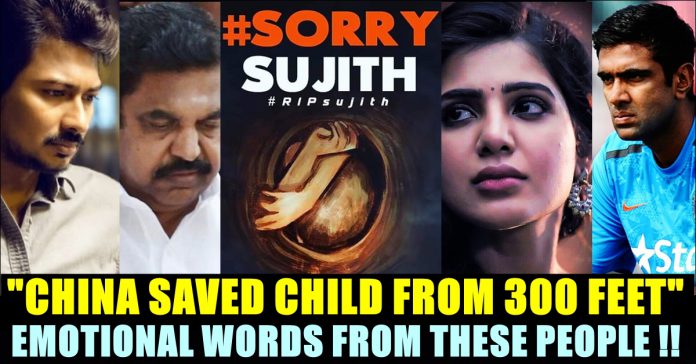 For past 5 days, people of Tamilnadu has been worrying and glued with the news channels. They couldn’t even celebrated the Diwali festival wholeheartedly as 2 years old Surjith was trapped in an abandoned bore well.

Now condolence messages are flooding the social media as authorities declared him as dead at 2 in the morning. They are mourning in social media platforms with various hashtags. From Union health minister Harsh Varadhan to Congress leader Rahul Gandhi, everyone expressing their sorrow on the departure of the child which struggled 80 long hours.

Tamilnadu chief minister Edappadi K Pazhaniswamy also released a press note, in a way of alerting the ministers to oversee if the new rules on abandoned bore wells are being followed. He also expressed his deep condolences to his family.

Here’s the messages posted by the people of social media :

IF only that borewell was shut
IF only there was a faster response
IF only there was better technology
So many IF’s for just this one incident that took an innocent child.
There’s no system to say it was a failure. HOPE we learn from what has happened. #SorrySujith

I’m sorry to hear about the passing of baby Sujith. My condolences to his grieving parents and his family.

Hereafter every parent's should have an eye on our children's and also our government should initiate new ideas and technologies to rescue these kind of problems in future #RIPSujith pic.twitter.com/yEs4X7iRM5

Heartbreaking to see dis happen over&over again #RIPSujith
In China a kid was saved from 300ft depth borewell
Disheartening to see our country spend so much money on so many other things but not able get technology to save lives from such incidents!
Parents PLS be more careful🙏🏻 pic.twitter.com/d6tRFzWaFF

Very depressing to see we lost #Sujith Govt. should come up with right laws to punish the land owners who leave the Bore wells open! Also should buy the technology & training for rescue in the future. He should be the last one to loose life to this!! #RIPSujith

😢. #RIPSujith
May we never again lose another surjith wilson . Awareness campaign most urgent need . Safety precautions MUST be adhered to #BoreWells must be licensed and policed. pic.twitter.com/HsOtYtsVOa

Let us pray for Surjith’s soul to rest in peace !!