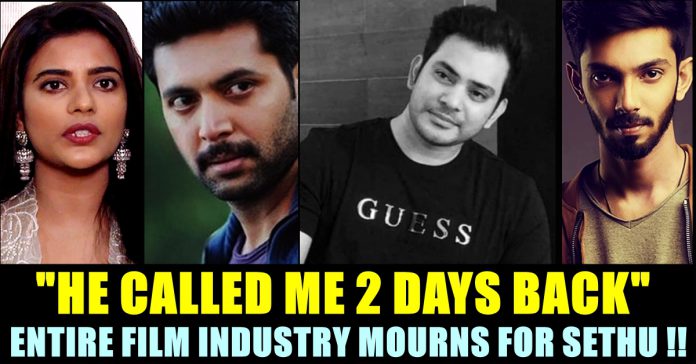 A dermatologist by profession, Sethuraman who is best known for 2013 comedy flick “Kanna Laddu Thinna Aasaya” passed away due to a cardiac arrest on Thursday night. This news broke the hearts of million as the doctor was seen participating in interactions with youtube channels actively. His latest Instagram story which was updated 10 hours before his demise, left people in denial.

After the success of Kanna Laddu Thinna Aasaya, Sethu featured in three more films, namely Vaaliba Raja (2016), Sakka Podu Podu Raja (2017), 50/50 (2019). He was serving full time at his Chennai based skin care and cosmetology facility “Zi clinic”. Sethuraman who was just 34 years old, has a one year old daughter which devastated the entire Tamil film industry.

Actress Khushbu changed her profile picture and shared her personal experience with the doctor. Khushbu said that he called her 2 days back to know if everything was ok. “ever so smiling,soft spoken,very good doctor..more so a wonderful human being..his world revolved around his daughter..she would be with him at the clinic. Poor his wife..so young n unassuming.”

Followed by her many celebrities including actor Santhanam, Anirudh, Venkat Prabhu. Check out their condolence posts below :

Gone very very soon my friend!!! Just 36 years old getting a cardiac arrest :(((( It’s not at all fair god!! Not at all Fair!! My deepest condolences to the family! #missUsethu #rip pic.twitter.com/SuRf1RYUVh

RIP Sethu. Shocked. Such a kind and gentle soul. Gone too soon.

This proves that life is so uncertain .. we’re living in such a time , we don’t know if we will wake up alive tomorrow ..
Deepest condolences to his family … so young and dint deserve this 😔 #RIPDrSethu pic.twitter.com/zZB00lNW68

RIP Sethu. Still in shock and denial. Wonderful person… Prayers and strength to his beautiful family to overcome this loss 💔 pic.twitter.com/bz2bMvP3Fw

Can't believe this, so shocking, dermatologist Dr.sethuraman passed away. My condolences to his family 🙏 pic.twitter.com/paXxJfamBW

Wt an unassuming lovable decent caring pleasant person! How healthy looking Doctor he was! My heart felt deep condolences to his family n friends. If sudden demise is a fate, then I have nothing to say on it, but hate😭 pic.twitter.com/etcFFJ6V53

This is heartbreaking 😢 RIP

Young Actor Doctor Sethu made this Corona awareness video on 23rd March. On 26th he died. Heart attack.
💔
I am too shocked to even to think up words of consolation. 😰
Condolences. https://t.co/cbMROdi9dw

Totally shocked and depressed on the demise of my dear friend Dr.Sethu.. May his soul rest in peace😔 pic.twitter.com/TuRnUxLleA

Let us pray to god for his soul to rest in peace !!

Previous articleMan Predicted The Arrival Of Coronavirus 7 Years Ago !!
Next article“This Is My Fort, Ask CM To Come Here” Police Teaches Right Lesson To Ignorant Youth !!

As soon as the first look of Vijay's upcoming film which was tentatively titled as "Thalapathy 66" released, trolls and memes started flooding the...