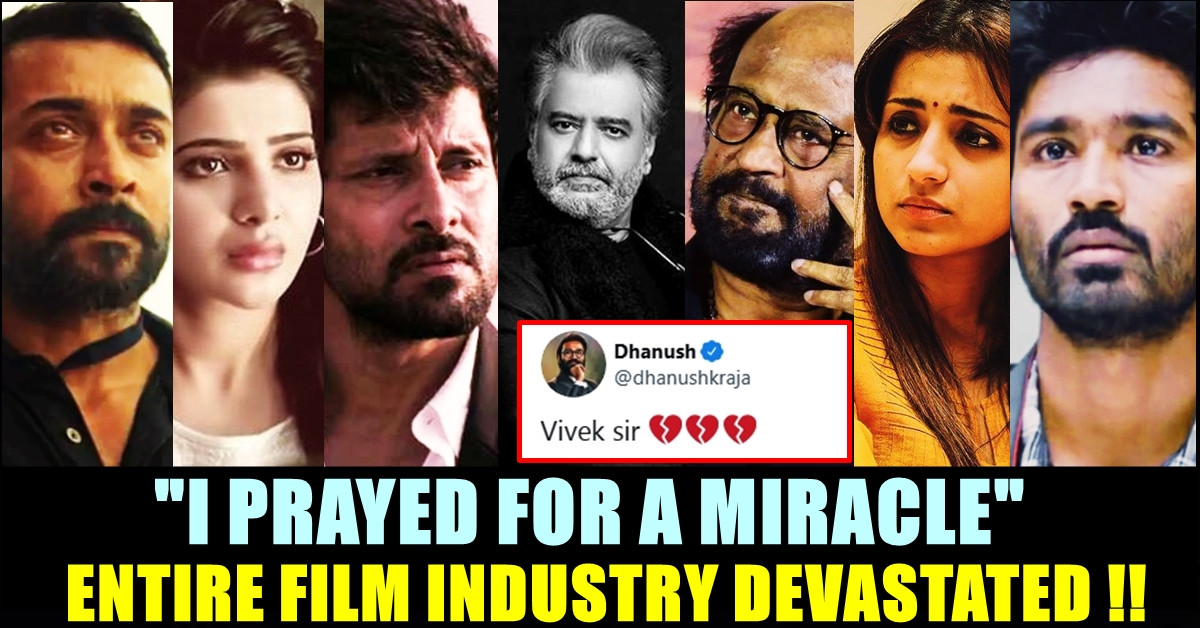 On the wee hours of Saturday, actor Vivekh who predominantly appeared in Tamil films, died in the hospital after suffering a cardiac arrest. On the morning of Friday, an unconscious Vivekh was brought to the SIMS hospital in Chennai. He reportedly suffered a cardiac arrest due to a 100% blockage in heart vessel. It is reported that the actor was revived and underwent an emergency coronary angiogram followed by angioplasty. He was then put on Extracorporeal Membrane Oxygenation support to circulate blood through an artificial lung back into the bloodstream.

In a way of clearing the air on whether Vivekh suffered cardiac arrest due to the COVID 19 vaccine shot he took on Thursday, Dr. Raju Sivasamy, vice president of SIMS hospital said that Vivekh’s condition was not related to the vaccine he took. “It took nearly an hour for the doctors to remove the block. He was then put on an ECMO. His is an acute coronary syndrome with cardiogenic shock and not related to the vaccine,” Dr. Raju Sivasamy said and confirmed that Vivekh wasn’t infected with COVID 19 virus.

The actor who is known for providing comedy with social message in his films, is an ardent environmentalist who aimed to 1 crore trees. According to his twitter bio, the actor has planted 33. 23 lakh plantings so far. Entire film fraternity got devastated on hearing about the news and are offering their condolences through tweets.

Pictures and videos of Tamil cinema celebrities reaching his house at Virugambakkam to the pay the last rites is doing rounds in social media as well. Actor Rajinikanth , in his tweet said that he couldn’t forget the days he spent with Vivekh during “Sivaji” film shooting and offered condolences to Vivekh’s family members. Kamal Haasan said that his demise is a big loss for the Tamil society as he always wanted to do something back for the people and was succeeding in it.

RIP @Actor_Vivek sir.Heart broken and stunned that you would embark on your heavenly journey so suddenly and early.The world is deprived of a truly good man who genuinely cared for everyone and everything in it. I will so miss your laughter, wisdom and care.The heavens are lucky pic.twitter.com/cb3QKyp5Ih

Heart broken and shattered. Great loss to the industry and to the society. Such a gem of person. So much he wanted to do for the society. Will miss you sir. Love u sir always @Actor_Vivek #RIPVivekSir pic.twitter.com/Vu6Ep6t6fW

I prayed for a miracle that you would come back safe but shocked beyond words now. Memories of working alongside you still remains fresh in my mind. Your greatness will live through your trees. #RIPVivekSir Prayers and strength to the family.

End of an era 💔 pic.twitter.com/QmoCBvMKcI

An epitome of energy. Still cant believe you are no more sir. #RIPVivekSir You will be missed, no one can replace you. 💔💔 pic.twitter.com/90MXoKhxEi

RIP Vivek Sir ! 💔💔 something about watching you on screen always made one feel like we’ve known you forever. This is truly heartbreaking. pic.twitter.com/MQZQaBH6Og

Shocked and devastated beyond words. I remember he was the first person ever to call and wish me when our first song released. Rest in peace Vivek sir. Your legacy will live on forever 🙏🏻

I am deeply saddened by the loss we have encountered. My condolences to the family.
You will be dearly missed Vivek Sir. Rest in peace 🙏🏼 pic.twitter.com/00jhTYIcZK

Shocked beyond words. Couldn’t hold back my tears. God took you from us too soon. Blessed in this lifetime to share a movie with you. Will always treasure the moments shared together. A true legend in the industry. A dark day to cinema! #ripvivek sir 🙏🏽 pic.twitter.com/uOBgGnNHrh

Shocked and saddened by the passing away of veteran actor #Vivek sir! 💔 My deepest condolences to his family and loved ones! May his soul rest in peace 🙏

Shocked and saddened beyond words.. An immense loss.. You will be dearly missed #Vivek sir 🙏🏻#RIPVivekSir pic.twitter.com/mY2qFTTvUv

#NewProfilePic gone away too soon. You entertained us all your life, now you leave us in tears and pain. #RIP #Vivek 🙏🙏🙏🙏 pic.twitter.com/Z5M40z7YJu

Ahhh.. #vivek …gone too soon dear friend ..thank you for planting thoughts n trees …thank you for entertaining and empowering us with your wit and humour..will miss you…RIP pic.twitter.com/oyoOkx8G9q

RIP #Vivek sir! You will be missed. pic.twitter.com/ZLSFtAbhSm

Really heartbreaking & not able to accept that our @Actor_Vivek sir is not with us anymore!! You’ve inspired millions with your performance, social work and also by being a wonderful soul!
More than an actor, as a human you’ve always won our hearts. #RIPVivekSir

Deeply saddened to hear the demise of #Vivek you will always remain in our hearts. My condolences to Vivek Ji's family.#RIPVivekSir pic.twitter.com/odO0CuJlZ8

Deares Vivek Sir,
I met you when I did my first Tamil film and you were the most gracious person I have ever met..
Thank You all the warmth and support you have always given so many actors like me, i will treasure my experience always #RIPVivekSir

Shocking to know that @Actor_Vivek sir is no more with us.. A great man with a lovely heart who made us laugh and think responsibly. Gone too soon..😔
We are definitely going to miss his presence..
We love you sir!!😭
You will always be there in our hearts..🙏 #RIPVivekSir

"HARI um SHIVAN um ONNU, ATHAI ARIYATHAVAN VAIYIL MANNU"- @Actor_Vivek.
Lots to learn from the way @Actor_Vivek has lived his life. He has given alot to the society by his comedy and to nature by planting millions of trees. A brilliant example of leading life. #RIPVivekSir