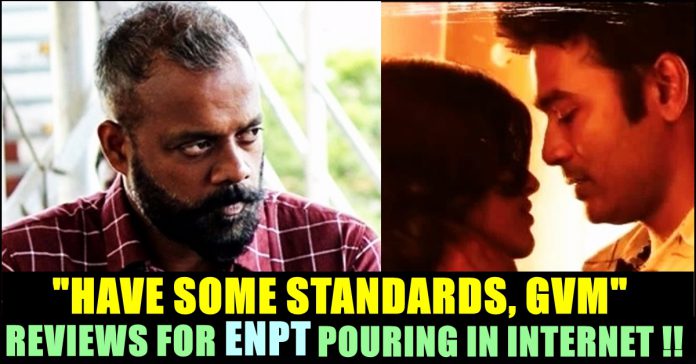 Really excited to announce that enai noki paayum thota WILL release in theatres tomorrow. Just received confirmation and eagerly awaiting the response of the audience.#enptfromtomorrow https://t.co/bCTgURsPgY

The film ENPT released with the help of Ishari Ganesh’s Vels films international with whom Gautham is doing his next film, Joshua Imai Pol Kaakka. As the film has released today, those who have watched the film started posting their reviews in internet.

Each posted their in their respective perspective. Popular movie tracker Kaushik, unexpectedly expressed his disappointment over the filmmaker for the way he portrayed woman his films. Shockingly he asked Gautham to have some basic standards as well. Check out his tweet below :

#ENPT #EnaiNokiPaayumThota – Some of the dialogues and words related to female characters are crude and vulgar; they shdve been avoided. #GVM has set his ‘class’ standards high, and we expect that minimum basic standard in his films.

Check out some of the other reviews from the netizens below :

Watch it for @dhanushkraja and Music..

#ENPT: Everyday stuff. A very generic action thriller that has a decent first half and a dragging second. No great shakes in this film that doesn’t have a good storyline and just sticks to GVM’s usual style and technique. Dhanush and Darbuka score, but I badly wanted more.

#ENPT – An average romantic action thriller from @menongautham. High time he should come out of the voice over mode. @dhanushkraja has given his best. @akash_megha looks pretty. #SenthilVeeraswamy looks deadly as the antagonist.

What do you think on the reviews ENPT is getting ?? Comment your views below !!

Amidst many cinema celebrities who are donating money and other essentials in various ways to help the people who stuck in corona lockdown, Bollywood...