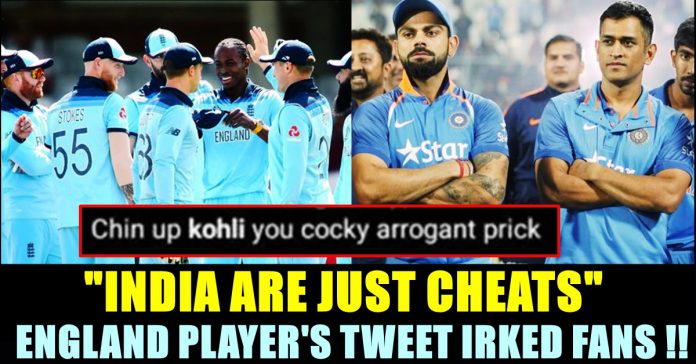 India successfully defeated Team England in the first One Day International pretty much comfortably after beating them in the test and T 20 series. “This is one of our sweetest wins in the recent past. This one is right up there with any other. Getting nine wickets so quickly is outstanding. To come back into the game the way they did is brilliant. I’m a really, really proud man right now. Team showed great character and intensity.” said Virat Kohli in the post match presentation while talking about the victory in the first ODI.

While fans are celebrating the victory, a bunch of old tweets posted by England’s spinner Matt Parkinson who is also a part of the England squad, has irked the fans. Social media users of India started trolling the cricketer for the mean comments he has posted against the Indian cricketers. The leg spinner has made derogatory comments against the cricketers of India from 2012 to 2014.

He called the Indian players as cheaters and also said that former Indian captain Dhoni and current skipper Virat Kohli as disgraces. Matt Parkinson also termed Virat Kohli as “Arroogant” and demeaned the quality of India’s first class cricket by saying that Jadeja doesn’t know how to bat and he has scored three triple centuries.

It is expected that he will be playing second ODI against India. Though Parkinson has deleted many of his tweets, Indian fans were keen enough to take the screen shots to slam him.

“How dare he said harsh words about our team, especially Kohli and Dhoni?????????” wrote a fan whereas another one said “Hope he forgot Sir Jadeja Innings against New Zealand in semifinals of CWC 2019.”

SOME OF HIS TWEETS FEW YEARS BACK 😼…………….
KOHLI IS COMING FOR YOU ……….#INDvsENG pic.twitter.com/ZMwZaiTacT

Matt Parkinson is in current England squad for ODI. 🙂 pic.twitter.com/vqG0wpNkxn

Your hatred for Kohli is unbelievable. You are matt parkinson without any talent.. 🤣

How dare he said harsh words about our team, especially Kohli and Dhoni?????????

Virat please destroy Mark Parkinson if he plays.
That 💩 deserves to be taught a lesson.#INDvENG

How bad is this Matt Parkinson @mattyparky96 😂😂😂 how bad this looks for a guy who comments on others but, he himself is not a good player 😂😂😂😂 and also the guy who can’t find a place in 11… thx to all who proved themselves @msdhoni @imVkohli @imjadeja @BCCI

Most lately, an audio conversation between a student and a teacher surfaced in the internet and it was about the latter brainwashing the former...

Ashwin Got Brutally Trolled By Murali Vijay For His Bowling Actions ?? Watch This Video !!

Murali Vijay is one of the best openers in Indian cricket industry. He still opens for the Indian team in Test cricket format. After...