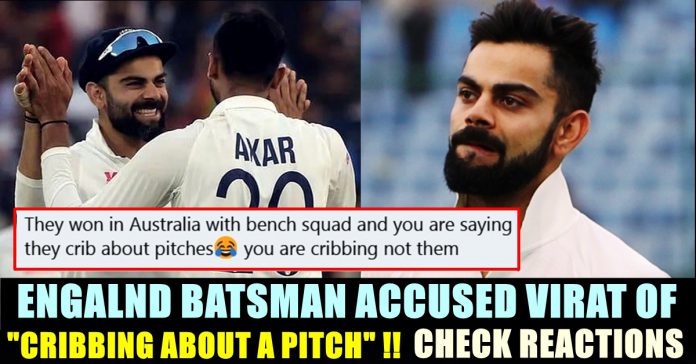 Ahead of the fourth and final test between India and England, Captain Virat Kohli came up with strong and bold statement slamming the critics who blamed the pitches of Motera ground. In the virtual press conference, the cricketer said that team India is successful because they don’t crib about the pitches.

A huge debate on the behaviour of Motera pitch took place in social media platforms since the victory of Team India in their third test against England. The five day long test match got completed within two days as England lost all their twenty wickets while facing the spinners of team India. Many, including players who played for India in the past, argued that the spinning pitches like Motera, Chepauk could cause harm to the test cricket and demeaned the victory of team India.

In the press conference that took place on Wednesday ,Virat Kohli referred to a match India played against New Zealand where they got all out within 36 overs and the Indian captain said that no one talked about pitch at that time. “We lost in New zealand on day three in just 36 overs and I am sure none of our people wrote about the pitch” Virat Kohli said.

“It was all about how India badly played against New zealand and none of the pitches were criticized. Nobody saw how much the ball was doing and how the ball was moving and how much grass was there on the wicket. The reason behind our success is that we never crib about the pitches we play on. We will continue to do that as a team” he added.

💬 "Unfortunate that there’s too much noise about spinning tracks."

Ahead of the fourth @Paytm #INDvENG Test, #TeamIndia skipper @imVkohli weighs in on the discussion about pitches. pic.twitter.com/tcra6nj5Ys

Reacting to this statement of Kohli, Michael Vaughan, former England player came up with a statement saying that the groundsman was sacked after the first test in which Joe root scored a double century. Vaughan mocked Kohli by asking whether it is cribbing or not through his tweet. “Pretty sure the Groundsman was sacked after the 1st Test because the pitch was too flat !!!!! Isn’t that cribbing about a pitch ??” his tweet read.

Pretty sure the Groundsman was sacked after the 1st Test because the pitch was too flat !!!!! Isn’t that cribbing about a pitch ?? #JustAsking ? https://t.co/ZlX2RABikZ

Irked by the tweet of him, fans of Indian cricket team thrashed him left and right as the curator was not sacked but was sent to prepare the pitches for the matches of Vijay Hazare trophy. “They won in Australia with bench squad and you are saying they crib about pitches. you are cribbing not them” wrote a follower and another one said “Wasn’t sacked he was already a makeshift curator for only the first test. And he’s been now sent to some other state for his services. Was always a ‘ Temporary Curator’

Wasn't sacked he was already a makeshift curator for only the first test. And he's been now sent to some other state for his services. Was always a ' Temporary Curator'

The curator was sent to prepare pitches for Vijay Hazare Trophy (50-over) domestic tournament in india. Stop being a headline merchant, Vaughan.

The year is 2051:
Michael Vaughan is still crying about the turning pitches!! 😂😂🤦‍♂️🤦‍♂️@MichaelVaughan #JustSaying #OnOn #INDvENG

Previous articleVeteran Actor Sivakumar Stopped Acting Due To This Behaviour Of A Girl ?? WATCH
Next articleDale Steyn Sought Apologies After Getting Roasted By Fans !!