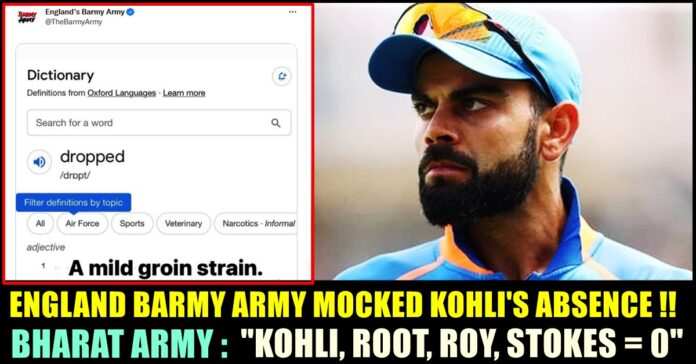 Team England’s official fan page “Barmy Army” mocked the absence of Kohli in the first One Day International. In Reply, India’s fan page “The Bharath Army” came up with a fitting response after England lost their top three batsmen for ducks. The twitter handle said that the combined score of Roy, Root and Stokes is equal to Kohli’s score today as all the three formers got out for zero today. The reply is going insanely viral and has got more likes than the original post of “Barmy Army”.

Virat Kohli is not playing the 1st ODI against England as he is out with a “niggle”, Indian captain Rohit Sharma informed after winning the toss and opting to field against England at the Oval in London, England. It was reported on Monday that Kohli is likely to miss the match due to a groin injury. The BCCI took to twitter to give an update on Kohli’s injury minutes after the toss.

“Virat Kohli and Arshdeep Singh were not considered for selection for the first ODI against England. Virat has a mild groin strain while Arshdeep has right abdominal strain. The BCCI Medical Team is monitoring them”  said BCCI in an update.

🚨 UPDATE: Virat Kohli and Arshdeep Singh were not considered for selection for the first ODI against England.

Virat has a mild groin strain while Arshdeep has right abdominal strain. The BCCI Medical Team is monitoring them.#TeamIndia | #ENGvIND

As soon as the announcement was made, fans of the cricketer has been expressing their worry. In the meantime, England’s official fan page “Barmy Army” came up with a post mocking Kohli’s absence in the match. In a way of making fun of Kohli’s tough phase, the page uploaded a post saying that adjective of “A mild groin strain” as “Dropped”.

The tweet didn’t age well as the top order batsmen of England didn’t help them by getting out for ducks and the English team ended their batting innings for 110 runs. India won the match effortlessly in the 19th over with captain Rohit Sharma’s brilliant half century. Dhawan helped in the other end and sealed the team’s victory.

While the original tweet of Barmy Army got 3000 plus likes, the reply of Bharat Army is trending with 8000 plus likes and 1000 plus shares. Fans of team India are also giving it back to the Barmy Army in style.

Check out some of their replies below :

This gets nominated for Moments before disaster 😂
We didn’t need a number 3 today @TheBarmyArmy 🎺 https://t.co/OlsyWubJ29

From where does this dimwit @TheBarmyArmy get the confidence to troll Kohli? 😂 https://t.co/soO7BsPVaY