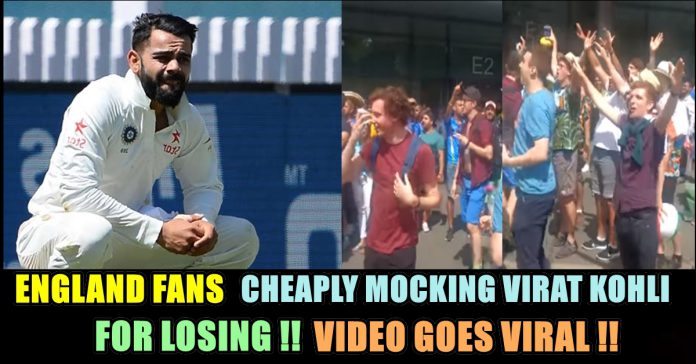 England and India were involved in the enthralling battle at Edgbaston over the last few days. The hosts though came out on top on the fourth day of the Test match and won it just by 31 runs. Virat Kohli was the best batsman for Team India but his heroics weren’t enough for them to take a 1-0 lead in the series. Many praised the visitors for putting up a stunning fight. However, England fans were seen mocking the Indian skipper after the first Test with the chants of his name. Kohli is always pumped up when he is on the field and the competitiveness brings the best out of him. He always likes a little bit of a banter in the middle and it started on the first day of the game when he mocked Joe Root’s mic-drop celebration after dismissing him. The crowd definitely didn’t like it as they booed him when he came out to bat on the second day of the game. As it turned out, Virat Kohli forced the same crowd to stand up and applaud him for his scintillating knock of 149 runs. In the second innings as well, the skipper led from the front and scored 51 runs. But his fellow mates disappointed him for the second time in as many innings. India faltered in the chase of 194 as a result and eventually were bowled out for 162 runs. The home side was thrilled to seal the game and they got some exceptional support on all the four days of the Test match. On such long tours, there is a lot of banter going on and England fans got an opportunity to troll the Indian team and Kohli was undoubtedly on their radar. After the game when the visitors’ team bus was leaving the venue, the overjoyed England fans began chanting,  “where is your Virat Kohli gone” and also targeted the disappointed Indian fans.
[wp_ad_camp_1]
Watch the video here :
Previous articleVishal Said Varalakshmi Is A Professional Actress !! Arya & Jayam Ravi Brutally Trolled Both !!
Next articleDancer Sathish Directly Bashing Kamal Haasan !! For His Way Of Hosting BIGG BOSS !!