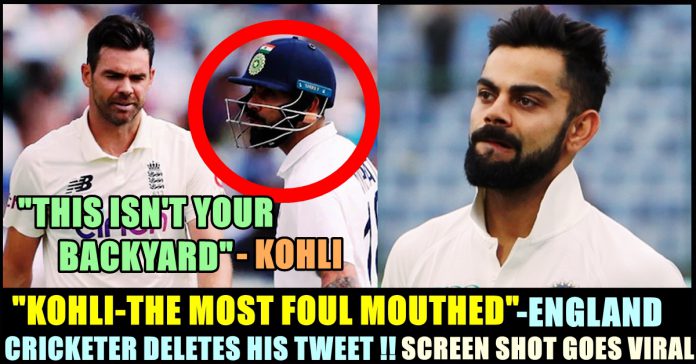 Former English cricketer Nick Compton deleted his tweet about Kohli after facing severe backlash from fans of Indian cricket team. After the end of second test that took place between India and England, Nick came up with a tweet saying that Kohli is the most foul mouthed individual. He also remembered about an incident he experienced in the year 2012 and spoke high of Sachin Tendulkar, Joe Root and Kane Williamson in his tweet. However, he deleted the tweet after receiving severe backlash from the fans of team India.

The second test saw so many emotions of the players of both the teams. Indian skipper Virat Kohli who is known for expressing his emotions on the field, involved in verbal spat with senior English bowler James Anderson. The duo argued over “swearing” and Kohli caught in stump mic saying that it was not Anderson’s backyard. When the 38 year old said that a bowler can run through the crease too, Kohli replied back saying “Chirp, Chirp, Chirp, that’s what old age makes you do”

This was not the end as the cricketer did something similar during England’s second innings. He was seen mouthing words to Jos Buttler and Ollie Robinson while they were batting, hoping to save the Test. On seeing these activities of Kohli, Nick Compton who represented England team during 2012-2016, came up with a tweet saying “Isn’t Kohli the most foul-mouthed individual? I’ll never forget the barrage of abuse I received in 2012 when the swearing 🤬 stunned me to the point that he did himself a serious disservice. It highlights what a level headed and grounded man Root, Tendulkar, Williamson et al are”.

The tweet garnered severe backlash from the fans of team India which made Nick to delete it. Check out some of the reactions :

Don't even care what Crompton led light has to say about Virat Kohli. Man has always been jealous of him and our team. Would be insane if we win the series convincingly. #ENGvIND

Who the fuck is this Nick Compton 🤣🤡 paddling agenda 24/7. Kohli Saab living Rent free in these loosers minds.🤣🤣🤣

Have to search on google, who the Nick compton is ?😂This player should give respect to Kohli. Mr Nike u should compare the numbers and the man you are talking about. You are just a small man Kohli is superstar and a greatest batsman ever in the history of cricket after sachin

After deleting his tweet, Nick also said “I am a real admirer of him (Virat Kohli) as a player. I think we should let it go on. We need some theatre and entertainment. We need some characters in the game, Kohli is a character. He brings a lot to cricket” to Sportskeeda. “I don’t think it is Anything personal. I think if you see likes of Kane, Root, they just go about their Cricket a different way. I am not saying weather it is right or wrong. I think the way Virat Kohli goes about it, there is definitely a place for it in the game.” he reportedly said.

Previous article“What Is The Difference Between You & Meera Mitun ?” – Actor Condemned BJP Worker
Next articleAnchors Who Worked With Anandha Kannan Broke Down In Tears !! WATCH