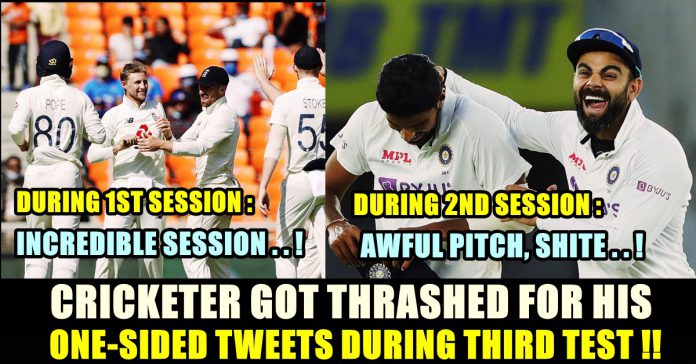 The third test match between England and India has almost saw the result within 2 days of the Game’s play. 17 wickets have fallen on the second day so far and England gave a target of just 49 runs to win the test match that is taking place at the Ahmedabad ground.

Former England cricketer Michael Vaughan who appreciated his team when they picked 7 wickets of team India in a single session, started criticizing the pitch after England’s batting performance. He is getting brutally trolled by the fans of Indian cricket team for changing his statements now and then. He became a victim of massive trolls after India won the test series in Australia as the cricketer predicted India to get white washed as 4-0.

Day one ended with India scoring 99 runs with the loss of three wickets. Minutes before the stumps, Kohli got out off Leach after looking to cut the ball which pitched near to the stumps. The skipper scored 27 runs and Rohit Sharma scored an half century. However, as soon as starting day 2, wickets started falling in a regular interval for India and the team got all out for 145 runs.

When England batsmen came in to bat, surprise was awaiting for them from the very first ball. Axar Patel picked five more wickets and Ashwin, with his four wickets achieved the 400 and 600 mark in Test and International cricket respectively. With Sundar picking up the last wicket, England got all out for 81 runs and India needed just 49 runs to win the third test.

Former England player, Steve Vaughan who is known for his controversial tweets about team India, uploaded a tweet criticizing the pitch. “Entertaining .. YES .. but this is a awful pitch for Test cricket .. !!!! Complete lottery on day 2 !!” he said in his tweet.

In another tweet, Vaughan called the pitch as “Shite”

These tweets from the former cricketer getting severely criticized by the fans of team India. Many came up with his earlier tweet through which he expressed his happiness over England’s performance in the same pitch. When English bowlers picked the wickets of Indian batsmen, Michaele wrote “England now favourites … incredible session !! #INDvENG”

“Commentators keep talking like it’s the bowlers choosing to bowl the big turner or the straight one… just a lottery” wrote a follower to troll Vaughan whereas many posted the screen shot of Vaughan’s old tweets.

The pitch is not all to blame. Absolute shambles of a batting display. Looks like its the first time some have picked up a bat. Disgrace

Although I partially agree, did you even see the shots your batsmen tried to play? Complete brain failure on day 2 !!

don't know if u were saying that at 10am this morning when England were getting rite back in the game !!

don't know if u were saying that at 10am this morning when England were getting rite back in the game !!

And now English batsman are getting out then he is crying harder😂 atleast stick to one single point pic.twitter.com/Ma9coh8UbZ

Same for both teams?
England the new crying baby after srilanka?

You were delighted when Root was bowling however 🤔🤔