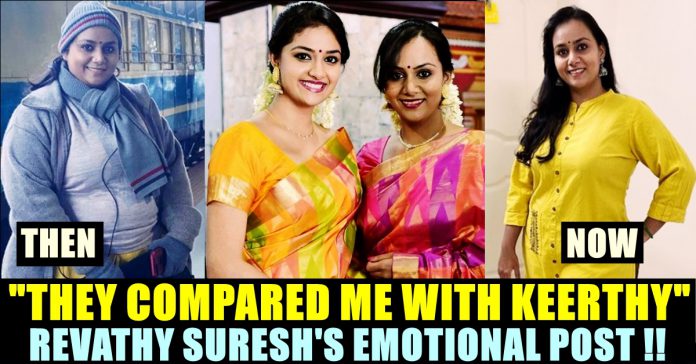 Revathy Suresh, elder sister of popular Tamil actress Keerthy Suresh came up with a post in her Instagram account sharing about the trauma she went through due to the comments that were passed by the people to her on reducing her body weight. She who revealed that she often got compared with the “Penguin” actress and her mother, thanked her Yoga teacher for helping her to reduce 20 plus kilograms through the post. Sharing the post in her Instagram story, Keerthy Suresh expressed her love towards her elder sister.

Revathy Suresh and Keerthy Suresh are the children of veteran actress Menakha Suresh and director G. Suresh Kumar who also produced movies. Revathy Suresh who is enjoying 13k plus followers in the photo posting social media platform, on Monday, came up with a long post sharing a collage picture of her old and new pictures.

She started her post by saying that she has been struggling all her life managing her body weight. Revathy revealed that she often got compared with the physique her sister Keerthy Suresh and mother Menakha Suresh. She said that the constant comparison lowered her self confidence during her teenage years and made her feel that she is not as beautiful as her mother and sister.

“I always felt like I wasn’t normal and something was indeed wrong with me. People made me believe in those things, even to a point when my husband proposed, I wondered what he actually saw in me! ” wrote Revathy in her post and shared how people gave her free advices and diet plans without hesitation.

She further went on to share how a woman complimented her sister and mother and humiliated her. “One lady complimented how beautiful my sister and mom were, and the moment I thanked her for her kind words, she responded “What happened to you?” I had already made peace with the Universe for the way I looked but I never was ready to be judged constantly about how I looked.” Revathy’s post read.

She who said that she spent several hours in front of the mirror, worrying about her shape, also shared how her sister Keerthy Suresh and mother Menaka supported her by complimenting her appearance. Though, Revathy couldn’t come out of the societal comments which made her believe that she’s “damaged”

However, Tara Sudharshan, a yoga teacher helped Revathi to reduce her weight. “She pointed out the goodness in me; She finally made me realize I am beautiful in and out and that I don’t need anybody’s validation or Approval! My first mile stone – 20+ KG weight loss is dedicated to my lovely Yoga Acharya and my Guru Tara Sudarshan.” Revathy concluded her post.

Previous articleTamil nadu Chief Minister Edappadi K Pazhaniswamy Released The New Industrial Policy 2021!!
Next articleMan Tried To Enlarge His Penis By Using A “Ring” To Surprise His GF On Valentines Day !! Ended Up In Hospital

TV Actress Sreenithi Opened About The Casting Couch She Faced In The Industry!!

Television actress Sreenithi who is known for her appearance as a lead actress in Vijay TV's "Senthoora Poove", opened about the casting couch she...

On Sunday, India's star batsman Virat Kohli continued his botched run in world cricket as he fell for just 11 in the third and...