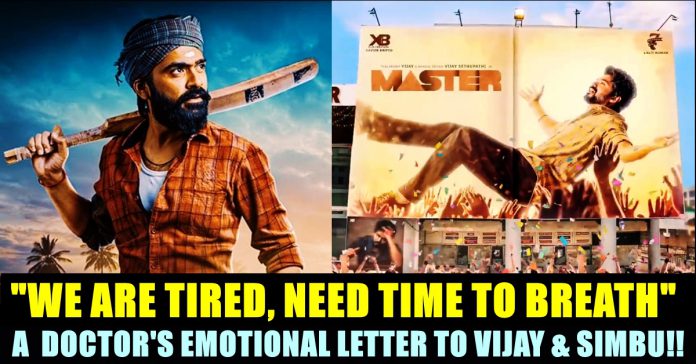 Amidst the furore on the decision made by Tamil nadu government regarding the release of upcoming Tamil films “Master” and “Eashwaran”, An emotional letter of a resident doctor is doing rounds in social media platforms. The letter is being widely circulated by the Internet using citizens with captions opposing the 100 percentage occupancy in the theatres of Tamil nadu from the 10th of January.

The Facebook bio of Aravith Srinivas says that he is a Junior resident doctor at Jawaharlal Institute of Postgraduate Medical Education & Research. In his Facebook post which is written to actors Vijay, Silambarasan and Chief Minister of Tamil nadu, Aravinth said that he is tired. The youth says, not only him, thousands of doctors along with Police officials, Sanitary workers and Health care workers are all tired.

Aravinth requests for some time to breath and says that the above mentioned frontline workers have worked so hard at the ground level to make sure the damage done is kept to as low as possible amidst an unprecedented pandemic. “We don’t have cameras in front of us. We don’t do stunt sequences. We aren’t heroes. But we deserve some time to breath. We don’t want to fall prey to someone’s selfishness and greed.” reads the post of Aravinth.

He further said that the decision of 100 % occupancy in theatres is a suicide attempt as the pandemic isn’t over and people are still dying due to the disease. He termed the decision as “blatant barter system” and “trading lives for money”. He requested the authorities to slowly try and to concentrate on the lives rather than reigniting the slowly burning out flame. I wanted to make this post scientific and explain why we are still in danger. But that’s when I asked myself, “what’s the point?” Aravinth concluded his post.

This post of the resident doctor is being widely shared across all the social media platforms. “A resident doctor on the Tamil Nadu Govt’s decision to allow 100% occupancy in movie theaters from the earlier 50%. Reel heroes have been pandered to but what about the real heroes?” wrote a twitter user whereas another one said “Just not him, but it’s the voice of people of tn

This letter, being circulated on many groups deserves to be widely read. A resident doctor on the Tamil Nadu Govt's decision to allow 100% occupancy in movie theaters from the earlier 50%. Reel heroes have been pandered to but what about the real heroes? pic.twitter.com/oksxC9z5fL

A letter from a doctor, a covid warrior. Just not him, but it's the voice of people of tn #TNGovt #COVID19 @CMOTamilNadu
@actor_vijay https://t.co/p2aZRIOaTS

On open letter from a doctor to vijay and simbu.

Tamil nadu government has agreed for 100 % occupancy in theatres ahead of actor Vijay’s Master and Silambarasan’s Eashwaran release. Responding to the request of The Tamil nadu exhibitors association and actor Vijay’s direct approach, Chief minister Edappadi Pazhaniswamy seems to have made the important decision.

Famous Comedy Actor & Blacksheep Owner RJ Vigneshkanth Is All Set To Get Married!!

RJ Vigneshkanth who is known for appearing in a number of films as comedy actor, is all set to get hitched. Engagement ceremony of...

Jacquline’s Sharp Reply To Those Who Trolled Her Voice !!

Vijay TV fame Jacquline who never shied away from giving back to trolls and abuses, now came up with a strong reply to those...