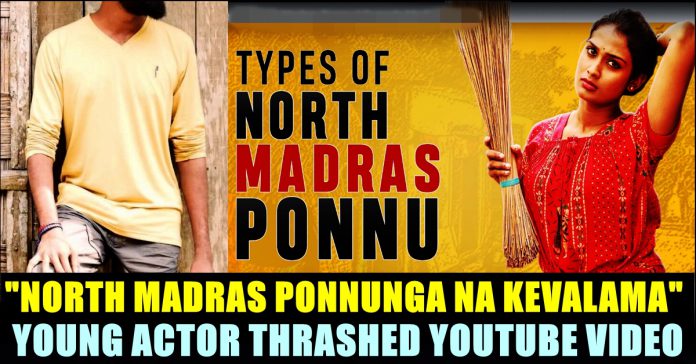 Youtube channels related to various fields have emerged in large numbers in India recently. Purpose of most of them is to entertain the subscribers of their channel. Starting from prank videos to celebrity interviews, many youtube channels grabbing the audience in its own way. Youtubers nowadays are also publishing Sketch videos in order to attract audience. A youtube sketch is nothing but a compilation of mindless comedy scenes in a single video.

Ramesh Tilak who is known for his appearance in films like Soodhu Kavvum, Imaikka Nodigal was last seen in Malayalam blockbuster Kumbalangi Nights is expected to be seen in more films which are in various stages of production.

Ramesh who posted the pictures of his written letter in his official twitter account, feels that the video “Types of North Madras Ponnu” disturbed him. “I saw the video “Types of North Madras Ponnu” in youtube. The most frustrating things I have witnessed in that video is that they portrayed a North Madras girl as a girl who couldn’t speak English but excels in her local language. The girl would say WBM instead of BMW to impress her boyfriend. Though I somehow managed sit through the above mentioned scenes, I happened to see a scene where the girl would stitch her own sandal before meeting her boyfriend. On what basis these people are labelling the residents of North Madras as such ?? What wrong in stitching a sandal of her own?? and what’s so funny about it ??” asked Ramesh out of frustration in his post.

Check out the pictures posted by Ramesh Tilak here :

“Is this the way this young generation sees those who couldn’t buy a new sandal ??” Ramesh further asked. “North Madras is not a knowledge, it is a lifestyle. “I see it as a big sin to belittle someone by considering their financial status. Who gave you the rights to treat me as a disgust. Not only the makers of this video, I request everyone to change their perception towards North Madras. If you use your humour sense in your videos without discriminating anyone, I believe it will reach 400 million.” he added.

Having acted in critically acclaimed films such as Kaala, Kaaka Muttai etc, Ramesh proved that he is a socially responsible person in real life too. What do you think on this post of the “Soodhu Kavvum” actor ?? Comment your views below !!

Previous articleWhy Cheran Walked Out Of Kamal’s Mahanathi ?? WATCH VIDEO !!
Next articleFan Couldn’t Believe The Final Result Of Super Singer !! Check How Judge Replied To Him !!

Tamil Hero Trolled Nirmala Sitharaman For Her Statements About Petrol Price Hike In 2013 & 2021 !! MUST WATCH VIDEO

The hike in petrol price has been causing angry reactions against the ruling government in the centre. Followed by the netizens, actor Siddharth who...

As soon as Dhoni announced about his retirement from International cricket, speculations about his after life is doing rounds in the social media platforms....